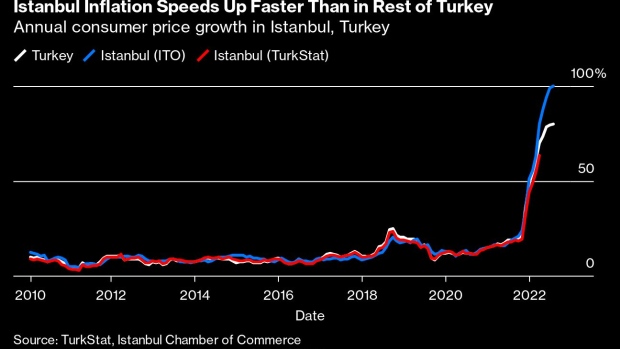 Crowds of visitors make their way along the spice bazaar in the Eminonu district of Istanbul, Turkey, on Tuesday, Sept. 20, 2022. Key Turkish banks are buying back shares after stocks reversed an unprecedented rally last week, providing relief for brokerages hit by the rout. , Bloomberg

Annual retail inflation in Turkey’s most crowded city climbed to 107.4% in September from 99.9% the previous month, the Istanbul Chamber of Commerce said on Saturday. That’s the highest reading, according to data going back to 1996.

The cost of everything from rent to food rose sharply last month, a breakdown of the monthly price data shows. Broad-based increases have become commonplace since Turkey’s central bank started lowering interest rates around a year ago despite runaway inflation.

The ultra-loose monetary policy is championed by Erdogan, who says lowering the cost of credit will help slow inflation, an argument that goes against the most fundamental assumptions held by central bankers around the world.

Price data in Istanbul, a city of roughly 16 million people, are collected by the city’s chamber of commerce that was established in 1882. The cost-of-living index compiled by the group used to closely track nationwide figures until the correlation broke down in April, the same month that Turkey’s statistics service stopped breaking out regional data.

The gap between the national figure and that published by Istanbul’s chamber of commerce is at its widest since 2004, causing concern that inflation in Turkey changes based on who’s counting and where.

When asked last month about the growing discrepancy, state statistics agency Turkstat said inflation outside of Istanbul was below the price increases measured in the city.