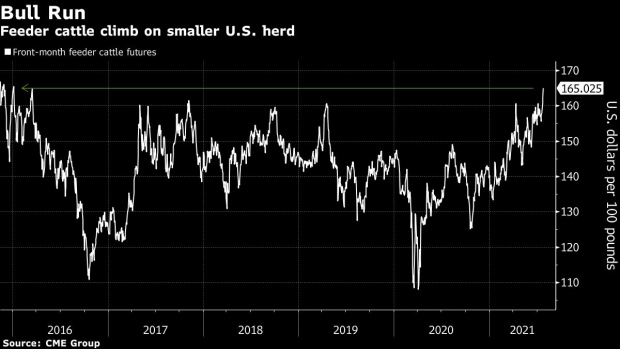 (Bloomberg) -- A little-known market, that of young cattle, is signaling that pricey beef could be here to stay awhile.

Feeder cattle are animals that have not yet been fattened on corn for slaughter in feedlots. Prices for those on the futures market climbed to the highest since March 2016 in Chicago. The gains followed a survey showing the American herd shrank 1.3% from a year ago.

The shift could mean that even higher beef prices are on the way for consumers, who have already seen increases on burgers and steaks in the past year after the pandemic threw supply chains into turmoil.

It also means meatpackers like Tyson Foods Inc., who have been enjoying record high beef margins during the upsets, will have to pay more for cattle.

Cattle operators have been complaining to Washington that beef packers capture an outsize share of profits while ranchers suffer. Now, ranchers may be able to regain leverage by reducing the number of animals available for sale.

“All else equal, lower cattle supply historically has been a negative for packers such as Tyson,” JPMorgan Chase & Co. analysts including Ken Goldman said in a note Monday.

Feeder cattle futures for September delivery rose as high as the 3-cent exchange limit to $1.65525 a pound in Chicago, the highest since March 17, 2016.

Tyson declined to comment, citing a quiet period before earnings.