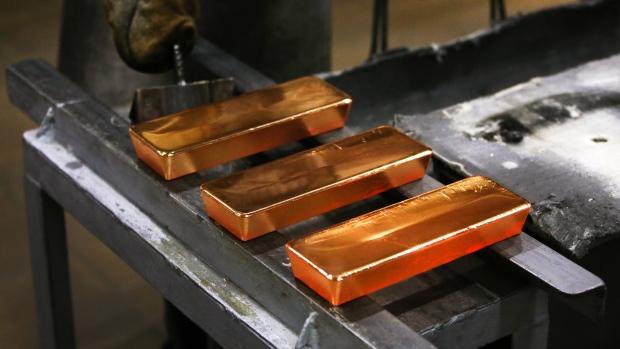 Three red hot gold ingots cool after being removed from casting molds by a worker in the foundry at the JSC Krastsvetmet non-ferrous metals plant in Krasnoyarsk, Russia, on Friday, March 3, 2017. Krastsvetmet refines and releases nonferrous metals. , Bloomberg

(Bloomberg) -- Bullion may be trading near a six-year high, but gold-mining executives keen to show they’re conscientious on costs were munching on potato salad instead of oysters at this week’s industry gathering in Denver.

As the chief executive officer of Agnico Eagle Mines Ltd., Sean Boyd, put it: “A general theme of this conference has been the need to maintain discipline.”

That sentiment was echoed in presentations, interviews and the general coffee-time chatter at the gold industry’s largest U.S. gathering of the year. There was little buzz when it came to deals, and most mining executives stressed they were making business decisions based on a gold price of $1,200 an ounce, even as the metal traded above $1,500.

“The message to the mines isn’t ‘It’s open season now,”’ for ramping up output at all cost, Boyd said in a presentation at the Denver Gold Forum on Tuesday.

Gold producers are putting into practice hard lessons learned during the metal’s last bull surge. Prices in the spot market reached a record $1,921.17 in 2011, but quickly started to collapse from the euphoria as gains in the equity market and economic growth meant the metal fell out of favor as a haven. By the end of 2015, prices had tumbled about 45%.

In the meantime, mining companies started ramping up production during the rally, at times taking on high-capital projects. The subsequent price slump dismayed investors who have only been lured back after cost cutting, debt reduction and boosts in productivity.

Now that bullion is back in favor, many miners are playing it safe. CEOs including Sebastien de Montessus of Endeavour Mining Corp. and Paul Rollinson of Kinross Gold Corp. emphasized they didn’t feel pressure to get into big-time mergers and acquisitions. Most executives speaking during presentations and interviews emphasized plans for organic growth and optimizing existing assets.

Barrick Gold Corp. CEO Mark Bristow also said there wasn’t much deal chatter at the conference, while saying that consolidation would be good for the industry.

To be sure, there does seem to be some deal interest when it comes to Chinese producers. China Gold International Resources Corp., the overseas arm of state-owned China National Gold Group, is on the hunt for acquisitions to replenish its pipeline, Jerry Xie, executive vice president, said in an interview. The company is comfortable making purchases with a price tag at roughly $1 billion to $2 billion, Xie said.

That seemed to be a rare exception. Even when it comes to selling, producers are cautious.

Newmont Goldcorp Corp.’s incoming CEO Tom Palmer said he’s ready to sit tight on investments even if that means not reaching a previously announced goal of as much as $1.5 billion in asset sales after the company’s merger with Goldcorp.

“We’re in no rush to sell anything,” Palmer said in an interview Tuesday at the Denver Gold Forum.

In an interview with Bloomberg Television, Palmer said there hasn’t been much discussion of M&A at the conference. That runs counter to what some analysts were expecting before the conference. Newmont’s mega-merger with Goldcorp, along with Barrick’s purchase of Randgold Resources Ltd., helped drive M&A in the sector to $18.2 billion in 2019, the highest level in eight years, according to data compiled by Bloomberg.

Now companies are turning their focus to “managing their businesses,” Palmer said.

To contact the reporters on this story: Vinicy Chan in New York at vchan91@bloomberg.net;Millie Munshi in Denver at mmunshi@bloomberg.net