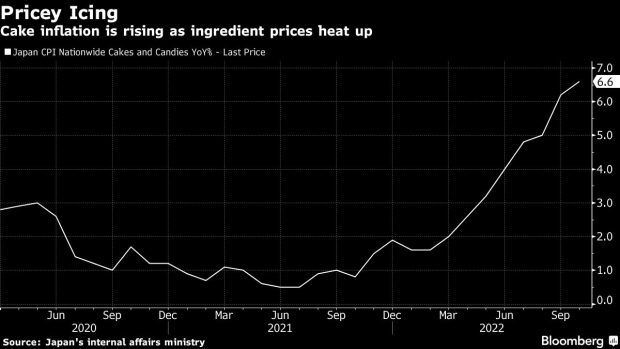 A worker displays a Christmas-themed cake inside a patisserie in Paris, France, on Monday, Dec. 21, 2020. The surge in Covid-19 and the introduction of a second national lockdown has led analysts to slash forecasts, with GDP predicted to contract by 4.7% in the fourth quarter. Photographer: Nathan Laine/Bloomberg , Bloomberg

The average price of a holiday season cake has risen by around 5% since last year to 4,040 yen ($30), according to a Teikoku Databank report published Tuesday.

The costlier cakes are symbolic of this year’s inflationary trend, given their ingredients. Flour and milk for instance gained 52% and 11% respectively, the report said. Sugar also saw an 8% bump.

This year the historic yen slide and higher commodity prices driven by the war in Ukraine have inflated import costs, pushing up prices for a wide range of items in Japan. The price tag for take-out boxes and food packaging film, as well as gas and electricity bills have also shot up, according to the report, creating a headache for confectioners.

“It looks like there’ll be a tug-of-war between consumers and firms over the price of these once-a-year special-occasion cakes,” the report said.

Teikoku Databank said that over 20,000 food items have already gone up in price this year, a development reflected in the nationwide inflation figure, which hit a four-decade high in October. Meanwhile, real wages dropped for a seventh month in October, likely eating into households’ appetite for shopping.

The data firm forecasts that inflation will continue next year, with more than 4,000 food items scheduled to go up in price.

To ease the hit of higher prices on consumption, Prime Minister Fumio Kishida put together an economic stimulus package that includes aid to reduce energy costs and cash handouts for childcare, though not all the relief measures will arrive in time for Christmas.