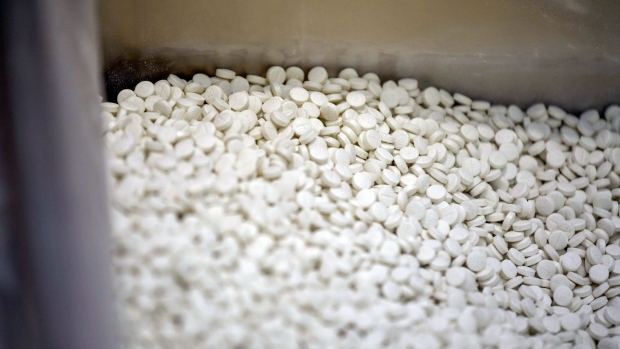 (Bloomberg) -- Medicare prescription plans are much slower to cover new generic drugs than private plans, according to an industry study, a sign that many seniors may be overpaying for their medicines.

A research report on Thursday from the Access for Affordable Medicines, or AAM, a lobbying group for the generic-drug industry, shows just 22% of generic drugs are covered by Medicare plans in their first year on the market, compared with the 46% of new copycat drugs covered by commercial drug plans.

Even after three years on the market, only around half of new generics will have been added to the lists of medications covered by Medicare prescription plans, on average, the report said.

Generic medications are intended to be a low-cost alternative to brand-name drugs, and the Trump administration has made getting more of them into pharmacies a key plank of its efforts to lower drug prices. But slow uptake by insurance plans is a symptom of a deeper problem with an opaque system of rebates and other incentives that can make sticking with branded drugs more palatable for payers, patient advocates say.

“As a patient I can’t know if a preferred drug is there on a formulary if it’s the best drug, or it’s the least expensive among equally effective options, or if the PBM got a big kickback or rebate for putting it there,” said David Mitchell, a cancer patient and president of Patients for Affordable Drugs, a nonprofit that fights for lower drug prices. PBMs, or pharmacy-benefit managers, negotiate prices and decide which drugs are covered by insurance.

A separate AAM study in September said seniors could be paying as much as $4 billion a year out of pocket as a result of the lag in getting generic options onto drug plans.

The lag may be attributable in part to a recent Medicare policy shift that placed generic drugs in direct competition with branded therapies that often come with rich rebates for pharmacy-benefit managers.

Patients covered by prescription plans they get through work typically pay a fixed lower copay for a generic drug. In Medicare, generics often compete head-to-head with brand-name drugs because of the way the plans’ formularies, or rosters of covered medications, have been structured, particularly in the wake of a 2017 policy change that obscured the distinction between the two types of medicines.

As a result, branded drugs could actually cost less for the benefit manager while leaving seniors saddled with a higher co-pay.

“We want people to be paying the lowest cost possible,” said Leigh Purvis, director of health-services research at AARP’s Public Policy Institute. With “the lack of data and the murkiness of the prescription-drug system, it’s really hard to say how money is moving and to whose benefit.”

U.S. senators recently introduced an amendment to a bipartisan drug-pricing bill that would require Medicare health plans to place generic drugs on designated generic tiers to limit what patients spend out-of-pocket on prescriptions and eliminate the catch-all tier that allows branded and generic drugs to compete head-to-head.

CMS said in April it would maintain the current formulary composition in 2020. The agency concluded that prohibiting generic drugs from being placed on tiers alongside branded drugs could increase out-of-pocket costs and raise Medicare drug premiums due to reduction in flexibility in plan design and reduced negotiating leverage with drugmakers, according to a CMS spokesperson.

Mitchell’s organization and the generic-drug lobby have been pushing Congress to make changes that steer seniors in Medicare to the lower-copay option.

“Put generics on generic tiers, don’t mix them up with these more expensive drugs,” said Mitchell. “Let’s be clear on what reduces the overall cost for the people who are paying the bills, which is us.”

Cathryn Donaldson, a spokeswoman for America’s Health Insurance Plans, said that the first generic versions of branded drugs don’t often come at low enough prices to make a meaningful difference. The group also argues that if drug plans were forced to put generic drugs on a specific rung of a drug plan, prices would rise for all consumers.

For generic drug companies, however, a change would be welcome. The industry has been navigating years of declining prices in the U.S., which has weighed on their businesses. The U.S. Food and Drug Administration recently warned that some older but much-need medicines are no longer economically feasible for companies to produce.

Teva Pharmaceutical Industries Ltd., one of the world’s biggest generic drugmakers, is doing its best to ensure new generics get to patients, but the process has grown harder to navigate, its chief executive officer said.

“The whole U.S. health-care system is getting more and more complex and with the growth of Medicaid and Medicare it’s getting more complex,” Teva CEO Kare Schultz said in an interview. “There is a lot of work to be done on contracting and administration.”

“Whenever you’re making those investments, you have the expectation that market uptake will be strong,” she said. “That’s always been well-rewarded historically in the U.S., where we favor generics.”

But McClintic Coates said that uptake has slowed. “It’s not sustainable. We need to make sure that’s happening so that we can continue to make these investments,” she said.