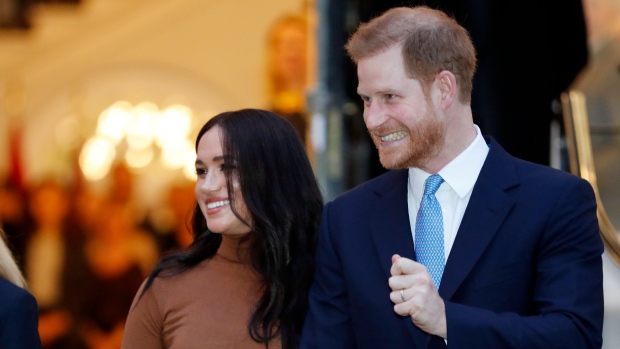 In this Tuesday Jan. 7, 2020 file photo Britain's Prince Harry and Meghan, Duchess of Sussex leave after visiting Canada House in London after their recent stay in Canada. , The Canadian Press

The royals are following the Obama playbook.

Prince Harry and Meghan, the Duchess of Sussex, will produce and host podcasts for Spotify Technology SA, adding to the Swedish streaming giant’s burgeoning podcast empire. The royal couple’s Archewell organization has signed a multiyear agreement with the company, with the first series coming next year.

Harry and Meghan have been tiptoeing into public life since stepping back from their royal roles and relocating to the U.S. After signing with a bureau for public speaking and creating a philanthropic group, they are now entering the world of entertainment — following a path similar to that of the Obamas after they left the White House. First they signed a deal to produce films and TV shows for Netflix Inc., and now a deal to produce podcasts for Spotify.

The Obamas’ first audio program, “The Michelle Obama Podcast,” has been a huge hit for Spotify, and the company is betting that the royals’ global appeal will draw millions of new listeners to its audio app. The royal family is a subject of great interest across the world, including in places where podcasting is still nascent.

The company has converted more than 70 million of its 320 million current users into podcast listeners and is pushing to make its app the default podcast experience outside the U.S. It offers more than 1.9 million podcast titles and has funded hundreds of original series.

“The power of their voices rests in their status as citizens of the world,” Dawn Ostroff, Spotify's chief content officer, said in a statement. “That they are embracing the extraordinary capacity of podcasts on Spotify while also seeking to elevate underrepresented voices is a testament to their appreciation for the potential of audio storytelling.”