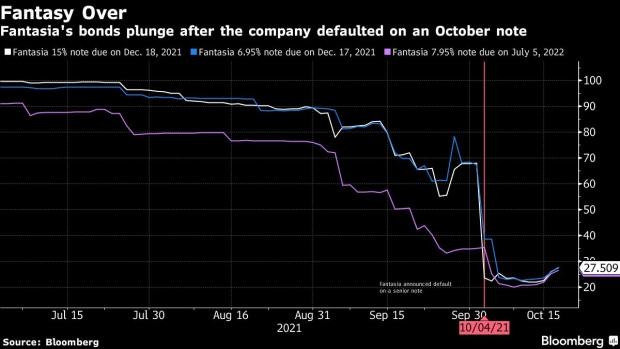 Now the 50-year-old “princeling” -- a term that refers to the descendants of powerful Communist Party founding members -- is gaining renown of her own as a central figure in the turmoil rippling China’s real estate sector.

While her Fantasia Holdings Group is small relative to troubled giant China Evergrande Group, its shock failure to repay a $205.7 million bond earlier this month spurred a dramatic selloff in the offshore market, with some investors taking it as a harbinger of a worsening liquidity crisis for China’s heavily leveraged property firms.

Zeng’s political pedigree has heightened speculation over the level of support troubled developers may receive as authorities clamp down on the debt-burdened sector. Beijing has hinted that it does not intend to bail out Evergrande, which has $300 billion in liabilities, and the fall of an ultra-connected company like Fantasia would underscore that stone-faced regulatory approach.

Zeng, who is also known as Baobao, faces mounting challenges. Given Fantasia’s political connections, it could become an illustration of the extent of China’s efforts to stem excessive lending. Onshore funding will become harder to obtain as banks and other lenders become more cautious, said Nigel Stevenson, a Hong Kong-based GMT Research analyst.

“The smaller developers will be disproportionately affected -- even those that are well connected,” he said.

Fantasia said it has hired advisors and is exploring payment solutions under a “legalized and marketized” principle. It’s still at a preliminary stage of assessment and creditors will be kept updated, said a company representative.

The developer’s missed payment spooked markets -- just several weeks before it said its operating performance was good, it had sufficient working capital and no liquidity issues. It also refuted a report that money for a privately placed bond hadn’t been transferred, saying it had wired payment, reinforcing the impression that it was in a position to honour upcoming obligations. Its trouble has underscored risks of imminently maturing private placements and opaque debts sold by other developers. That’s a concern for Evergrande too as investors await clarity over a missed payment for a note said to be guaranteed by the developer that could trigger cross-defaults.

“The reason it was such a shock is because the company had advised investors in the prior week that the bond would be taken out,” said Charles Macgregor, Head of Asia at Lucror Analytics. “Hence, the question arises of willingness to pay rather than ability.”

Ironically, the Zeng family’s high profile may make the optics of extending aid look worse for the Chinese government, given President Xi Jinping’s “common prosperity” mantra and campaign to narrow a wealth gap that has long favored clans like theirs.

Baobao’s uncle, Zeng Qinghong, was vice president from 2003 to 2008 and is reported to still be politically influential, though it’s hard to know with any certainty given the opacity of Chinese politics.

While Evergrande’s billionaire founder Hui Ka Yan was born into poverty in Henan province, Baobao’s privileged background is a vulnerable flank. After news of Fantasia’s default, some comments on her Weibo account questioned if she felt a sense of duty towards society as a member of one of China’s most powerful families.

“The crackdown on the real estate industry affecting many top companies like Evergrande or princeling businesses like Fantasia can be seen as a substantial effort by Xi to reinstate the quasi-Maoist ideal of common prosperity,” said Willy Lam, an adjunct professor at the Chinese University of Hong Kong’s Centre for China Studies, who has authored numerous books on Chinese politics. “These companies used to enjoy political protection, now they have no choice but to obey Xi’s new order.”

The Zeng family wealth has been in the spotlight before. In 2008, Zeng Qinghong’s son’s purchase of a $24 million mansion in Sydney’s Point Piper neighborhood -- and a headline-making fight with local authorities to demolish and rebuild the property -- was seen as one of the most egregious examples of princeling wealth-flaunting.

The son, Zeng Wei, was also a central figure in a 2007 expose by Caijing magazine, later removed from shelves, which found that princelings made billions in the ownership transfer of power company Shandong Luneng.

The family’s influence can be traced back to Baobao’s grandfather Zeng Shan, a Communist Party revolutionary who served as a high-ranking official under Mao after the Civil War, and her grandmother, Deng Liujin, one of the few female survivors of the Red Army’s brutal Long March.

Before becoming vice president in 2003, Zeng Qinghong rose through party ranks, starting as a military technician, then doing a stint as a manual laborer during the Cultural Revolution before holding positions in the oil industry.

Fantasia declined to comment on questions about Baobao’s relationship with Zeng Qinghong.

Fantasia’s fate isn’t yet sealed, with the family’s sprawling financial interests and its links to other property developers key to whether it survives the default crisis.

The family appeared in the 2016 Panama Papers, which found that Zeng Qinghong’s brother, Zeng Qinghuai, was the director of a company, China Cultural Exchange Association Ltd., that was incorporated in Niue and then re-domiciled in 2006 in Samoa.

If the government assesses that too many other developers would be hurt if Fantasia goes under -- that is, that risk of contagion is high -- support might still be forthcoming. Fantasia has joint venture projects with other real estate firms including Kaisa Group Holdings Ltd. and Yuexiu Property Co., which could help its bailout odds.

As her company’s fate hangs in the balance, Baby, as she’s also known, is striking an optimistic note. Minutes after the company announced on Oct. 4 it failed to repay the dollar bond, her personal Weibo account shared the poster for “Darkest Hour,” a movie about Winston Churchill’s early days as British prime minister during World War II.

A week later, she posted that she was reading a biography on him titled “Walking With Destiny.”

Seemingly echoing the historical figure’s famed “never give in” attitude, she sent a letter to Fantasia staff saying that the company “wouldn’t abandon or shirk its responsibilities.”