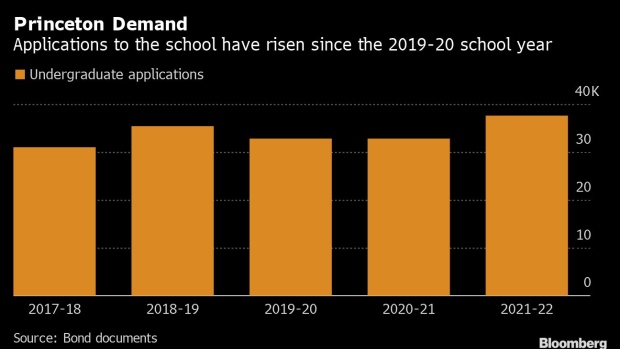 (Bloomberg) -- Princeton University plans to bring its sterling credit rating to a battered bond market with a sale of $600 million of debt to help finance an expansion of its New Jersey campus as it prepares to accommodate hundreds more undergraduate students.

The Ivy League school will issue half as tax-exempt debt through the New Jersey Educational Facilities Authority as soon as Tuesday. The remainder will be taxable, sold through the Trustees of Princeton University. That will make it the latest university to offer taxable securities this year, after schools including Harvard University, the Massachusetts Institute of Technology and Washington University in St. Louis.

Name recognition, top credit ratings and a relatively slow week of tax-exempt issuance will help Princeton’s bond sale stand out during a tumultuous stretch for fixed-income. Munis are off to their worst annual start on record, driving benchmark 10-year yields to the highest in eight years.

“Compared to everything else in the market, it should get a great price,” said Daniel Solender, head of municipals at Lord, Abbett & Co., who said he has bought Princeton debt in the past and is interested in the tax-exempt portion. “There should be plenty of demand.”

When the school sold tax-exempt debt last year, it obtained yields that were below top-rated munis, data compiled by Bloomberg show. Its securities are still trading tight to the benchmark index: Last week, debt maturing in 2029 with a 5% coupon traded at an average yield of 2.81%, or 10 basis points above the BVAL AAA curve. It originally priced in March 2021 at 0.89%, or 2 basis points below the benchmark.

Proceeds of this month’s sale will help fund two new groups of dorms under construction as the school plans to add 500 undergrads over four years, beginning this fall.

The bonds are also paying for the phase-out of steam generation for a more efficient hot-water heating system on the existing campus and an efficient system on a new campus in the adjacent township of West Windsor, according to Michael Hotchkiss, a spokesman.

The new campus, the first major expansion in West Windsor, will be built on lands Princeton has owned for more than 100 years and will include by 2023 a geo-exchange facility to heat and cool structures, graduate student housing and a 600-space garage. By 2025, the school will build a tennis and racquet center, a softball stadium, playing fields for rugby and recreational sports and a cross-country course.

In 2021-22, Princeton enrolled 8,382 undergraduate and graduate students. It admitted only 4% of undergrad applicants for that academic year, down from 6% the prior year, according to offering documents.

Princeton is among the richest universities measured by endowment per student, with a fund that was valued at almost $40 billion as of June 2021. Its 47% investment return for the year ended June 2021 ranked it second in the Ivy League behind Brown University.

“Demand in the market seems to be fairly selective, but Princeton is a solid gold name,” said Patrick Luby, a municipal strategist at CreditSights.