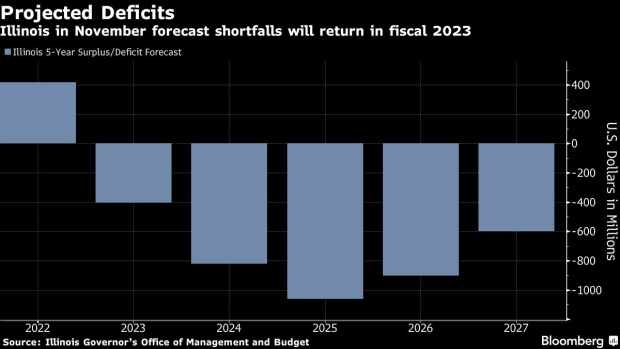 (Bloomberg) -- When Illinois Governor J.B. Pritzker, the billionaire Democrat running for re-election, delivers his fiscal 2023 budget proposal next week, his aim will be to show taxpayers, investors and legislators that the state’s financial gains are here to stay.

Illinois received its first credit upgrades in two decades last year amid a rebound in tax revenues and billions of dollars in pandemic-era federal aid. The improved finances allowed officials to pay years of backlogged bills and better investment returns helped the state reduce its unfunded pension liability for the first time since 2017.

It’s been a dramatic reversal for the state with the lowest credit rating. At the end of 2020, Illinois risked a downgrade to junk-bond status after taking emergency loans from the Federal Reserve to allay revenue losses from the pandemic. The state had almost no rainy day fund, paid an ever-higher penalty to borrow in the $4 trillion municipal bond market and Pritzker’s plan to collect more taxes from the wealthy was rejected by voters.

“The state has done a lot in recent years to right its fiscal ship,” said Amanda Kass, associate director of the Government Finance Research Center at the University of Illinois in Chicago. “Is that a blip in a long-term trend or is this the start of an upward trajectory in the state’s finances?”

The state has a history of financial missteps. Its unfunded pension liability had ballooned because it didn’t contribute enough for decades, leading it to take on billions in debt. An impasse between former Governor Bruce Rauner, a Republican, and the Democrat-controlled General Assembly resulted in the state having no budget from 2015 to 2017, sending unpaid bills soaring and creating more debt.

In recent campaign ads, Pritzker presents himself as the financial conservator the state needs. He says he plans to keep working to responsibly manage the budget, reduce Illinois’s interest costs, further cut the bill backlog and earn more credit upgrades. His budget proposal, scheduled for Feb. 2, is expected to outline some of those efforts.

“What they’ve seen for three years is very responsible fiscal leadership,” Pritzker said in an interview earlier this month, referring to the state’s stakeholders.

The penalty Illinois pays compared to benchmark 10-year municipal securities has remained under 1 percentage point for the last nine months, after reaching more than four percentage points in May 2020,  but it’s still the highest among peers. The bill backlog sits around $3 billion, from about $5 billion a year ago.

While Illinois was the only state to tap the Fed’s Municipal Liquidity Facility during the pandemic, it repaid the full $3.2 billion early. When S&P Global Ratings and Moody’s Investors Service upgraded the state in mid-2021 to BBB and Baa2 respectively, they cited not just the federal aid but better financial management as well. Fitch Ratings boosted its outlook to positive from negative for Illinois, and rates it BBB minus.

For fiscal 2022, the state has forecast a surplus of $418 million, bigger than an earlier estimate, citing cost cuts, use of part of its more than $8 billion in American Rescue Plan Act money, and higher revenue from sales and income taxes. The state kept most spending unchanged, other than education and vital services, Pritzker said.

“We intend to continue to be responsible,” he added.

For fiscal 2023, Pritzker’s budget office in November projected a deficit of $406 million, smaller than previously forecast. The governor declined to comment on specifics on spending and revenue for fiscal 2023, which begins July 1, such as whether he plans to increase the rainy day fund contribution beyond the already proposed $300 million.

“The goal would be to keep spending below the level of natural growth that would occur in the budget in terms of revenue, so that we can continue to put together a surplus for the state,” he said.

An upgrade could be in the offing if Illinois continues passing budgets on time, institutionalizes financial management and keeps paying down debts and bills, said Eric Kim, an analyst for Fitch Ratings. Pensions remain a challenge, Kim said.

“If there’s an opportunity for us to transfer assets, whether it’s cash or anything else, into the pension system that would reduce that net pension liability without having a detrimental impact upon our budget or upon the people who are recipients, vulnerable populations that are recipients of state services, we will always look at that,” Pritzker said, without offering specifics.

The overall pension system’s strong investment returns recently provided some help, but that may be temporary. Illinois’s total unfunded pension liability across five state-run systems fell 10% to $130 billion on June 30 from a record in fiscal 2020, the Commission on Government Forecasting and Accountability said in a December report.

The billions the state has received from the federal stimulus packages, including the American Rescue Plan Act, can’t be used for pensions or debt. The governor’s budget is expected to shed light on plans to spend remaining federal funds, said Laurence Msall, president of the Civic Federation, a government watchdog group. Potential contributions to the rainy day fund or the state’s unemployment insurance trust fund debt are possible and will get scrutiny, he said.

“Investors are going to be looking for a continuation of the demonstrated fiscal discipline and not letting this very unique opportunity go to waste,” said Ty Schoback, a senior municipal research analyst for Columbia Threadneedle Investments, which holds $17 billion in muni assets, including Illinois debt.

Pritzker says any concerns about higher ongoing spending given the influx of federal aid are misplaced.

“We have not dedicated any ARPA dollars to recurring programs,” said Pritzker, adding he and Democratic leaders of the General Assembly insist on this restraint. “Everything that we have dedicated those ARPA dollars to are one-time expenditures. We’ve been very disciplined about that from the beginning.”