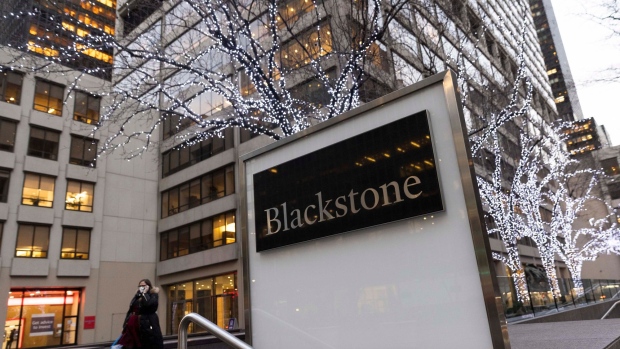 (Bloomberg) -- The giants of private credit -- the only game in town lately for big-ticket leveraged buyouts -- are dialing back on risk, in a turning point that threatens to reduce crucial financing for mega deals.

Blackstone Inc., Apollo Global Management Inc., Ares Management Corp., KKR & Co., Antares Capital LP and the asset management arm of Goldman Sachs Group Inc. are cutting the amount of debt they’re providing per deal as recession risk rises, according to people with knowledge of the matter who aren’t authorized to speak publicly. They’re also asking for, and getting, higher yields on financing packages with less leverage, while commanding stronger investor protections in case corporate borrowers go under, the people said.

In the first half of the year these private credit firms were willing to band together to provide as much as $5 billion, or even $7 billion, of debt for an acquisition. That has dwindled to around $2 billion for the unitranche loan portion, said one of the people, though such a figure remains large by historic standards.

The more cautious tone among the big direct lenders worsens the climate for debt-fueled corporate acquisitions and LBOs, both of which have already seen a drastic slowdown this year.

“It’s definitely a challenging market. We continue to assess each deal based on its merits,” said Carol Ann Wharton, a spokesperson for Antares.

There are key differences in the risk appetite between each firm. But broadly speaking these direct lenders, who had been willing to hold about $500 million on their books for deals earlier this year, have cut that to $200 million to $300 million, said the people.

Firms that routinely held more than a $1 billion of financing are cutting back on their hold size as well, they said. Fees for underwritten transactions have also increased to a range of 3% to 3.5% from about 2% to 3%, said one of the people.

With the high-yield bond and leveraged loan markets in the US and Europe under immense strain, private credit funds have emerged as crucial players to power mergers and acquisitions activity. At the same time, banks have stepped back after taking losses on bonds and loans they have brought recently to the market.

As recently as June, a group led by Blackstone provided about $5 billion of debt, one of the biggest seen in direct lending, to help fund the leveraged buyout of software maker Zendesk Inc. Around May, lenders including Blackstone and Ares offered a $4.5 billion unitranche loan, a popular structure for private credit that blends senior and junior debt into one, to fund a majority stake in Information Resources Inc.

Now with the Federal Reserve ramping up interest rates to tighten financial conditions, these lenders are paring back risk. Spreads have widened by 50 basis points to 150 basis points from a month ago, on top of the rise in the benchmark rate, the people said. Leverage has declined by half a turn, or 0.5-times less debt compared to earnings before interest, tax, depreciation and amortization, or Ebitda, said the people.

On the current trajectory, private equity firms would have to find more lenders than they had to previously for the same amount of financing. And with higher borrowing costs and less debt for acquisitions, they may be prompted to lower purchase prices, in what could be the biggest challenge yet to the M&A cycle this year.