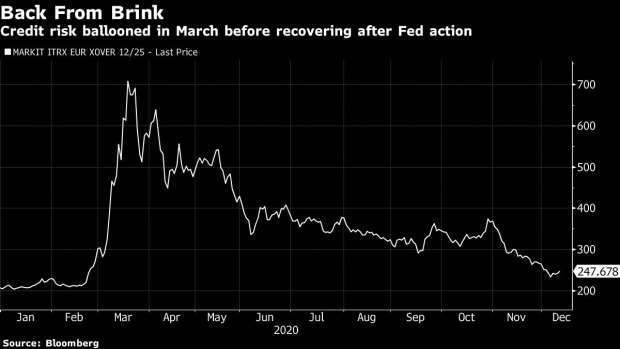 (Bloomberg) -- AlbaCore Capital LLP is closing the $1 billion fund and managed accounts it set up to invest in beaten-up credits during the pandemic after the strategy yielded a 55% gross return through the end of last month.

The turmoil caused when the first wave of Covid-19 infections shook markets in March meant many fundamentally strong borrowers fell into the target price range for its vehicle, known as AlbaCore Investment Opportunities, the London-based firm said in a statement.

The strategy paid off as the market rallied strongly when the U.S. Federal Reserve announced purchases of corporate debt and the European Central Bank launched its emergency quantitative easing program.

AlbaCore’s managers took a relatively cautious approach, allocating most of their investments to industries such as software, telecommunications and consumer staples that were spared the worst impact of the pandemic, David Allen, the firm’s founder, said in an interview.

“We bought a lot of senior secured debt and investment grade securities as low as 60-70 cents on the dollar,” said Allen. “Around 80% of our buying activity was in the safest parts of the market.”

Finding an appropriate benchmark to measure Albacore’s fund against is tricky. The firm uses a blend of the S&P European Leveraged Loan Index and Bloomberg Barclays Pan-European High Yield (Euro) Index as a proxy, which generated 1.7% in the year through Nov. 30, according to the statement. The fund does not employ a typical hedge fund strategy and far outstrips the 1.01% returned year to date by an index of credit hedge funds tracked by Bloomberg.

The Fed announced purchases of investment grade paper on March 23 and said April 9 it would buy some junk-rated debt. AlbaCore’s fund aimed at cashing in on price plunges caused by the pandemic made about half of its returns in the first 45 days after it began making investments in mid-March, Allen said.

While the fund focused on good-quality credits, it also placed some riskier bets on cruise companies whose revenue prospects crumpled with the spread of coronavirus outbreaks, said Allen. AlbaCore bet firms such as Carnival Corp. and Royal Caribbean Cruises Ltd. could raise enough capital to see them through the pandemic.

“Of a 30-point move, we’re happy to take the first 25 of that to ensure we lock in the return,” Allen said, referring to the rally in cruise liner debt. Carnival’s 550 million euros ($665 million) of bonds maturing 2022 have jumped to 95 cents on the euro from a low of about 67 in mid-May.

One industry that AlbaCore’s fund didn’t invest in was airlines, which can be “challenging” even in good times, he said.

The fund will keep investing into early 2021 when it will start to return capital to the investors, Allen said.

AlbaCore has invested $14.7 billion across 275 companies since it was founded four years ago.