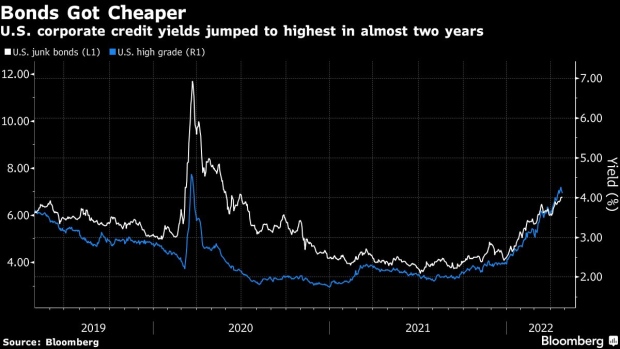 “There’s a little bit of a Goldilocks moment,” said Kipp deVeer, chief executive of Ares Capital Corp., on the business development company’s earnings call this week. “Where our company does well, our portfolio companies don’t do any worse or materially worse in a way that we think will create defaults or credit problems, and we hope we can sail through with that combination.”

Investors’ need for yield after central banks cut interest rates to historic lows to combat the fallout from the 2008 financial crisis turbo-charged private credit. It ballooned from almost non-existent to $1.2 trillion of assets by the end of September 2021, according to data provider Preqin.

Higher global rates would appear to undermine the case for sacrificing liquidity to get yield. But private credit fund managers see this as an opportunity for an asset class that’s mostly floating rate.

“The backdrop for private markets is as good as, or better than it was 12 months ago,” said Jeff Griffiths, a partner at advisory firm Campbell Lutyens & Co Ltd., which helps managers raise money for their funds. “In an environment where liquid credit real returns are challenged, it will push people to the private markets to protect against inflation,” said Griffiths.

Just over half the 350 investors surveyed by data provider Preqin intend to keep private credit allocations at the same level, up from 40% in 2021. A further 37% plan on increasing it, though that’s down from 47% the year before, according to the survey published last month. Those same investors cited interest rates and asset valuations as the biggest challenges to private credit.

Rates have risen significantly this year, but they are still far from the level that would get pension funds to their return targets.

“If insurance companies, sovereign wealth funds, pensions and endowments can find 6%-8% returns in safer, more liquid alternatives elsewhere, then you will see them reallocate away from private credit,” said Ed Eyerman, managing director and head of leveraged finance at Fitch Ratings. “You would probably need to benchmark government bonds offering 4%-6% first.”

Higher energy prices following Russia’s invasion of Ukraine have pushed inflation to rates not seen in developed markets for over 30 years.

“If anything, on a real return-adjusted basis, what inflation forces investors to do is to take more risk,” said Griffiths at Campbell Lutyens. “Inflation is a bad thing for government bonds and for liquid credit, that yield less. And it’s a better thing for private strategies like private equity, private credit.”

Large-scale asset managers that have grown with their credit businesses are busy highlighting to investors the seniority of their claims over businesses -- in contrast to lower-ranked equity investments. As well as the fact that yields will rise with rates -- unlike fixed-rate bonds.

“Default rates go up,” said Griffiths. “Spreads go out, returns look better, but loss rates go up. So there is a flip side.”

In the U.S., private credit default rates rose during the early stages of the pandemic, according to data compiled by law firm Proskauer. They peaked at 8.1% in the second quarter of 2020 as pandemic lockdowns took a toll, before falling back to 1.04% in the last quarter of 2021.

For now though, fund managers seeking investor cash are singing from the same hymn sheet.

“The future potential return is up,” said Griffiths. “If you just look at an unlevered gross return basis, in the last three to four months, the market has picked up a hundred to 100 basis points of return potential. You’ve gone from a 7% market to an 8% market.”