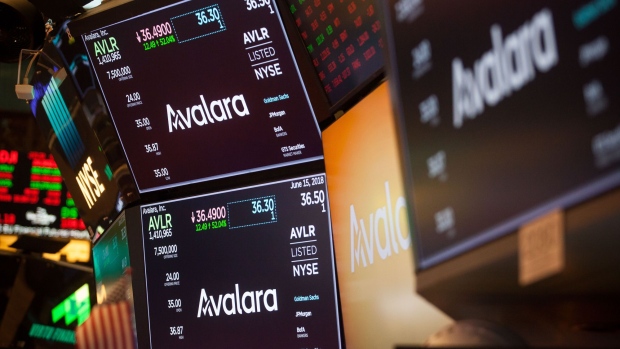 (Bloomberg) -- A group of private lenders led by Blue Owl Capital Inc. has agreed to provide a $2.5 billion loan to finance Vista Equity Partners’ acquisition of Avalara Inc., according to people with knowledge of the matter.

Apollo Global Management Inc. and HPS Investment Partners are also part of the financing, which was structured as a recurring-revenue loan, according to the people, who asked not to be identified discussing a private transaction.

Loans based on annual contracted revenue have become an increasingly popular way to finance buyouts in the software industry for companies that have yet to generate a profit. The space is largely dominated by private credit funds, as banks have a hard time underwriting debt for loss-making companies.

The loan for Avalara was structured as a unitranche, which blends first and second-lien debt into a single facility. It priced at a spread of between 7 and 7.5 percentage points over the Secured Overnight Financing Rate, according to one of the people. In addition, the financing also includes a $250 million revolver, the same person said.

Private credit providers have continued to finance mergers and acquisitions over the past several months, even as worries about inflation and a potential recession cooled investor appetite for risky corporate debt in the leveraged loan and high-yield bond markets.

A group of lenders led by New York-based Blue Owl last week agreed to finance Thoma Bravo’s takeover of Ping Identity Holding Corp., while in June lenders led by Blackstone Inc. agreed to provide about $5 billion for the take-private of Zendesk Inc.