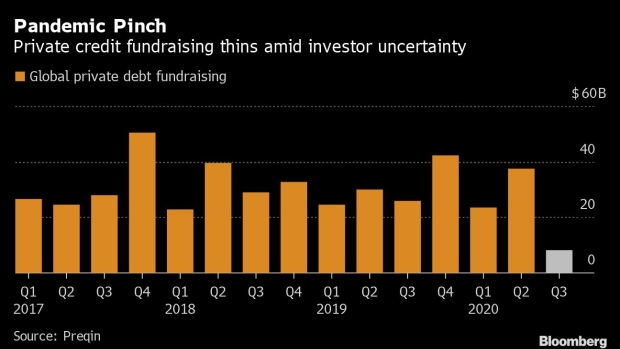 Private credit fundraising slumped globally to US$8.3 billion in the third quarter, down 68 per cent from the same period a year ago, as investors took a wait-and-see approach amid uncertainty caused by the pandemic.

The last quarter’s figures compare to US$37.6 billion brought in for the asset class in the second quarter, according to London-based research firm Preqin Ltd. In North America -- the biggest hub for alternative lending -- fundraising fell to $7.8 billion in the third quarter, down from US$24.6 billion the prior quarter and compared to $8.6 billion in the same period in 2019.

“What we’ve seen in the third quarter is a real reduction in the number of funds closed and the amount of capital raised, because investors have already allocated the capital potentially or it could just be the fact that Covid has not disappeared like some hoped,” David Lowery, Preqin’s head of research insights, said in a Wednesday interview.

In the U.S., investors keeping an eye on the Nov. 3 president election could also lead to them taking a “wait-and-see approach,” Lowery said.

Raising capital in the wake of a pandemic has undoubtedly been a challenge -- particularly when a credit manager is connecting with new investors, according to Theresa Shutt, chief investment officer at Canada-based Fiera Private Debt.

“With existing investors you’re a known entity, raising capital is much more straightforward, particularly for sequential fundraising,” Shutt said in an interview in Toronto. “So, for example, for raising money for funds six or seven or eight, with a strategy to deviate from previous funds, it’s much easier.”

Still, the massive amount of dry powder in private credit, now at roughly US$300 billion, gives managers that are able to stomach slightly more risk the ability to step in where banks have retrenched and the chance to secure higher yields.

“The risk would be putting money out too quickly without really understanding the longer term implications of COVID for some of these businesses and industries,” Shutt said.

Fiera has moved some of its portfolio monitoring to weekly from monthly, Shutt said, adding that the increased opportunity for alternative credit is similar to the boom seen in the wake of the 2008 financial crisis.

“In terms of opportunities, it’s similar to where we were in 2009 and ‘10,” she said. “There are more opportunities for alternative lenders to provide capital, and less competition, because the traditional lenders will be on the sidelines a bit more -- they are curtailing their lending.”