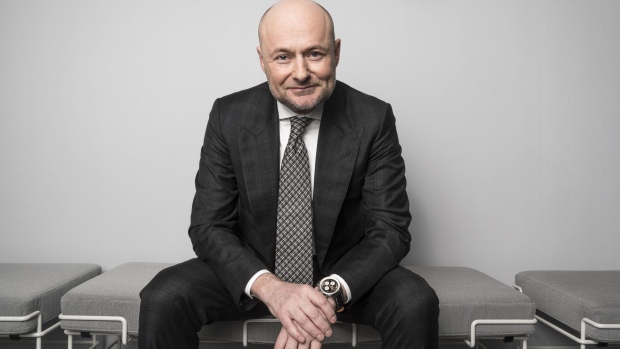 Premier luxury wristwatches, produced by Breitling AG, stand on display during day two of the 2019 Baselworld luxury watch and jewellery fair in Basel, Switzerland, on Thursday, March 21, 2019. The organizers of Baselworld and the Geneva salon have decided to coordinate the schedules of next year’s shows, previously held several months apart, to accommodate visitors who otherwise would have to have to fly to Switzerland twice , Bloomberg

(Bloomberg) -- In the five years since CVC Capital Partners bought control of Breitling AG, the company has more than quadrupled its equity value and is on the cusp of re-joining the Top 10 Swiss brands of luxury watches.

Now Georges Kern, who gave up a top job at luxury emporium Richemont to lead the revival, is open to acquisitions to help other watch brands follow Breitling’s path of rejuvenation. While he won’t disclose specific targets, Kern says he can call on CVC’s deal-making savvy and his own experience to turn around a struggling brand.

“We have a war machine, right?” Kern, Breitling’s chief eexecutive officer, said in an interview, referring to CVC. “Whatever we would consider, you know, you plug it in and you have huge leverage.”

On the surface, private equity and Swiss watchmaking aren’t an obvious pairing. One is focused on maximizing returns and reducing costs, while the other relies on highly trained workers, big marketing budgets and expensive investments for in-house developed movements to build brand cachet.

But Kern says the speed at which nimble owners like CVC can execute change and the surge in demand for Swiss watches make this an industry ripe for consolidation. At Breitling, he’s overhauled the business by opening stylish boutiques around the world, sharpening the portfolio and hiring brand ambassadors including Adam Driver and Charlize Theron.

For now, the biggest brands in the industry are out of reach, insulated in ownership structures that make takeovers all but impossible. Market leader Rolex SA is privately held and protected by a complex trust structure, as are family-controlled Audemars Piguet, the maker of the popular Royal Oak timepiece, and Patek Philippe. Many other brands, from Vacheron Constantin to Tag Heuer to Omega, are owned by luxury conglomerates.

At the time of its takeover, Breitling was owned by the Schneider family which, in 1979, bought the brand that had been founded by Leon Breitling in Switzerland’s Jura mountains in 1884. These days, there aren’t many Swiss watchmakers that remain independent. Among them are the likes of Oris or niche manufacturers like H. Moser & Cie or F.P. Journe.

Luxury conglomerate Kering went the other way earlier this year by selling its two watch brands -- Girard Perregaux and Ulysse Nardin -- after seeing no natural fit for them in its roster of fashion brands.

At Breitling, Kern streamlined the catalog and distribution channels with about 200 branded boutiques, including 40% that are company owned. Once known for overly polished, out-sized pilot watches and sexist marketing campaigns, Breitling refocused on modern interpretations of storied models including its Navitimer chronograph, its 1980s-inspired Chronomat and recent colorful versions of the Superocean dive watch.

The strategy is paying off. Breitling posted sales of about 700 million Swiss francs in 2021 -- an industry beating increase of more than 40%, according to Morgan Stanley and LuxeConsult. Sales are up another 25% by value so far this year, according to people familiar with the matter. The value of the business has jumped well above $3.1 billion from about $780 million at the time of the takeover, Bloomberg reported last year.

In 2021, Swiss investor Partners Group bought a minority stake in Breitling. It now owns about 23%, with company managers and executives, including Kern, owning about 10% and CVC the remaining two-thirds.

Kern said Breitling, like many other top brands, is reaping rewards from the current revival in Swiss mechanical watches that took hold during the pandemic as cash-flush consumers stuck at home began lusting over pricey timepieces on Instagram and other social media sites. (Kern, 57, is himself is a major presence and prolific poster on the network, with some 51,000 followers).

Breitling’s average selling price is now about $6,100, as the company uses more gold, precious stones and metals as well as in-house developed movements, a trend that’s been employed by rival brands as well. That’s up from about $5,000 in 2017. The company raised prices by about 5% this year, a response due in part to rising raw material and energy costs.

The surge in demand for luxury watches has been driven, in large part, by consumers in the US, where Breitling is well known and which overtook China last year as the top market for Swiss watch exports.

Still, it’s taken decades of effort by the Swiss industry and hundreds of millions in investment to convince “a guy in the Midwest on an oilfield with his pickup to change his Timex into a proper watch,” Kern said.