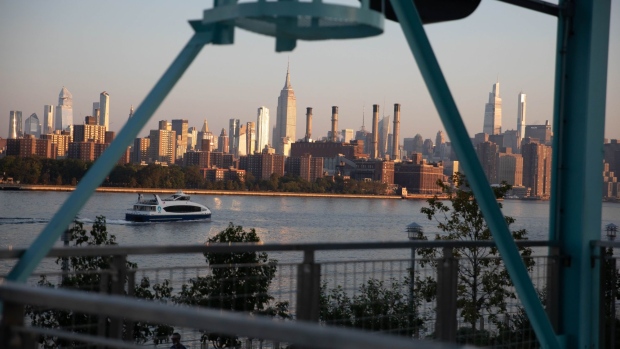 A ferry traveling up the East River seen from the in the Williamsburg neighborhood in Brooklyn borough of New York, U.S., on Friday, Sept. 4, 2020. U.S. stocks fell to a two-week low as megacap tech shares came under pressure for a second day, but came off their lows as the holiday weekend approached. Photographer: Michael Nagle/Bloomberg , Bloomberg

(Bloomberg) -- America’s mid-sized companies are faring better than industry watchers feared at the start of the pandemic, as private equity owners step in to help tide them over.

Sponsors have provided more cash to portfolio companies compared to the 2008 crisis, with a view that keeping businesses afloat will be more advantageous than potential restructurings or lender takeovers, according to Lincoln International, a middle-market advisory firm.

Private equity owners have also been very proactive in coming up with new ways to generate revenue and cut costs to keep companies going, according to Ron Kahn, co-head of Lincoln’s valuations and opinions group.

“Sponsors and lenders have worked very well together to make sure these companies have staying power,” Kahn said in an interview.

Some analysts had predicted that credit quality for business development companies, a roughly $100 billion industry that mainly lends to mid-sized borrowers, would get worse before it gets better. But those dire forecasts are now being dialed back in certain cases amid a slowdown in soured loans.

Businesses that initially positioned their budgets conservatively are now revising projections upward, according to Lincoln. Mid-sized companies have updated earnings projections to show an expected 13.1% Covid-related decline, down from forecasts for a 23.4% drop just three months ago.

Enterprise values for middle-market firms rose 4.4% in the third quarter, bringing them in line with levels seen at the end of 2019, Lincoln wrote. Multiples for enterprise values, meanwhile, reached an all-time high of 10.4 times for the last twelve months of earnings, according to Lincoln, whose index tracks more than 500 U.S. firms with less than $100 million in annual earnings.

Leverage covenant breaches have declined quarter-over-quarter to 12.6% in the third quarter from 15.6% in the second, paving the way for less debt amendments, Lincoln said. Middle-market lender Owl Rock Capital Corp., for example, is seeing a decline in loan amendment requests as borrowers in its credit portfolio report better financial performance.

“In April, May and June is when you were seeing a lot more amendments -- and those were addressed then,” Kahn said.