Canadian private equity firms pulled back on deal making in the first half of 2022, according to recent data from industry tracker PitchBook, with experts attributing the slowdown to economic factors such as rising interest rates and inflation.

The downturn in the private markets is likely to weigh on Canada's economy and investors as capital is harder to obtain or being temporarily withheld, industry experts warned.

"The rise in interest rates themselves do not have the most material effect. It's the availability of capital that's becoming more scarce and the economic prospects that are holding deals back," Mark Wiseman, chair of the Alberta Investment Management Corporation (AIMCo) and the former chief executive officer of the Canada Pension Plan Investment Board (CPPIB), said in a phone interview.

AIMCo and CPPIB are institutions that each handle billions of dollars in the private equity space on behalf of Canadians.

Data from PitchBook showed only 27 deals closed in the private equity space last month, compared to 51 deals in June of last year.

Private capital invested also hit a record low in the first quarter of 2022 at $1.4 billion, compared to $2.6 billion invested during the same time last year, according to the Canadian Venture Capital & Private Equity Association. 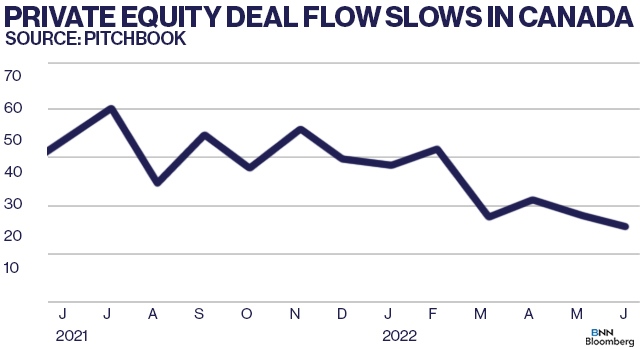 The implications of this slowdown could be far-reaching for Canada's economy as a lack of capital could impede business growth, Wiseman cautioned.

Private capital usually comes from institutional investors, including pension funds, insurance companies, and high-net-worth individuals. At the moment, these players want to have more liquidity and de-risk their portfolios, he added.

"What happens now is that institutional investors will be much more choosy when making deals," he said.

This cool down in merger and acquisition activity is also stemming from inflationary pressures and geopolitical risks, Vanessa Grant, partner and co-head of private equity Canada, at law firm Norton Rose Fulbright, said in a phone interview.

There's more due diligence than usual going into valuations for deals given the economic backdrop, she said.

Despite the pullback, private equity firms still have an obligation to deploy their capital — and, ultimately, they will, Michael Akkawi, a partner and leading advisor for private equity transactions at law firm Torys, said in a phone interview.

"The smart private equity players will use this time of uncertainty to buy companies at a depressed value,” he noted.

For one equity portfolio manager though, all investors in this space should be cautious about private assets in the current environment.

"A market like today demands a liquidity premium, and private credit investors are not being compensated enough for the risks they are taking," said Bryden Teich, a partner and portfolio manager at Avenue Investment Management, in a phone interview.

"The risks in private equity right now are much higher [compared to the public markets] — especially in the private debt side.”

Over the past decade, private equity as an asset class has attracted a lot of retail money, and he worries these investors are not fully aware of the dangers that could lie ahead.

"No one on the street is paying attention right now to the risks in the private markets, I don't think they're aware.”