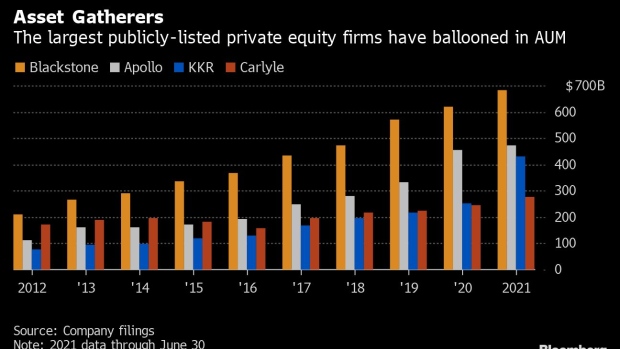 Commuters walk along the concourse after arriving at London Waterloo railway station in London, U.K., on Monday, June 7, 2021. Flexible office firm IWG Plc warned that the prolonged impact from the pandemic was delaying its recovery and that 2021 earnings would be “well below” last year's. Photographer: Jason Alden/Bloomberg , Bloomberg

(Bloomberg) -- The private equity industry is on a spending spree like never before.

Investors are flush with cash and looking to put the money to work. In the U.S., a private equity consortium recently announced one of the biggest leveraged buyouts of all time. And in the U.K., PE funds have been at their busiest since the financial crisis, targeting household names including grocery chain Wm Morrison Supermarkets Plc. By mid-2021, the sector had amassed a record $3.3 trillion of unspent capital, including $1 trillion held by buyout funds, giving it significant fire power for fresh acquisitions.

The industry’s success, however, is drawing greater scrutiny from authorities across the globe, potentially limiting future returns.

The industry has nearly tripled in size since the start of 2011. Combining equity deal value, exit value, and fundraising, the sector is on track to top $1 trillion by year-end, Hugh MacArthur, Head of Global Private Equity at Bain & Co, wrote in July.

While critics say managers simply extract as much cash as possible from highly leveraged and vulnerable companies, fans like to highlight the sector’s track record of growing businesses while outperforming equities. The industry’s performance is hard to measure. Academic research on this point is mixed and there’s no agreement among investors on a standard metric.

The money flows show little sign of slowing down. Private equity is now starting to expand into the retail market by rolling out products for household investors in the hope of tapping a savings pool worth upwards of $74 trillion.

The biggest buyout names have moved into credit, real estate, infrastructure and other areas, leading to new records in fund raising.

New York-based KKR alone raised a record $59 billion in the second quarter across its various private market strategies. Carlyle Group Inc. is seeking to raise as much as $27 billion for its latest flagship fund, in what would be the largest-ever private equity pool.

The latest asset class that everyone wants is secondaries: vehicles that focus on buying existing portfolios of private equity holdings from investors who want to exit before funds mature.

Secondaries also step in to buy out existing investors when fund managers want to continue holding an asset beyond the life time of the fund. The latest deal: In mid-September CVC Capital Partners agreed to acquire $8 billion secondary buyout specialist Glendower Capital.

With bigger funds come bigger deals. Private equity is steadily creeping into transactions that were previously the preserve of big businesses or sovereign wealth funds.

By clubbing together, several PE funds and key investors can pool resources to take on ever more ambitious targets. That’s what happened in June when Blackstone, Carlyle, and Hellman & Friedman, alongside Singapore’s GIC Pte in June announced a majority stake in Medline Industries Inc. in a deal worth more than $30 billion.

Also aiding the rise of ever larger deals has been the proliferation of private credit funds that have stepped in post-financial crisis to replace banks in some of the more riskier lending areas.

The U.K. has been a center of deal activity. Thanks to a permissive takeover code, a hands-off approach from government, and cheap valuations, the U.K. is on track for its busiest year of private equity deals since the financial crisis.

To be sure, while there is little at the moment to stop the flood of money into private equity, the sector’s growth is drawing more attention from regulators and politicians.

In the U.S, senior Democratic Party members are debating measures that would make it harder to add leverage on deals, as well as end tax breaks for fund managers. While in the U.K., a mid-market tabloid’s on-going campaign against private equity deals shows how the once obscure industry is starting to attract more hostile media.