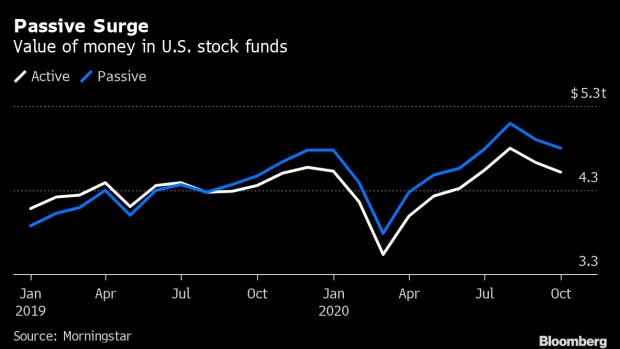 (Bloomberg Markets) -- When Niklas Ringby spots a stock worth buying, he ignores decades of diversification advice that most investors live and die by. In the words of hedge fund legend Stanley Druckenmiller, he bets the ranch. The EQT AB money manager’s approach of wagering on just a handful of stocks may sound like excessive risk-taking to a generation of punters warned against chucking all their eggs in one basket, but it’s churning out bumper profits. The $1 billion fund he runs from Stockholm with Fredrik Atting for the private equity giant has gained 35% this year, while European stocks are down 5%, according to an investor letter. That’s on top of the 45% it returned last year.

Ringby’s high-stakes strategy may offer a potential way forward for an industry in crisis. Stockpickers are persistently failing to beat their benchmarks and rapidly ceding ground to low-cost passive funds that just mimic an index. In a world awash with data and computer-driven trading where price-sensitive information is instantly factored into share values, active funds must find a way to stay relevant. That means depth instead of breadth in stockpicking and bolder, high-conviction long-term bets.

“High diversification can be an overkill nowadays,” says Nicolas Roth, head of alternative assets at private bank Reyl & Cie. “Given how passive investing is evolving, it is likely that the future of active management becomes more specialized and concentrated portfolios being one of those specialties.”

Spreading wagers over a large number of bets had been at the core of portfolio management for decades. But that’s led to many managers hugging their benchmarks and producing little or no outperformance after fees, creating a fertile ground for cheaper passive funds to grab market share.

The tide has turned. Last year the investment industry hit one of the biggest milestones in its modern history, as assets in U.S. index-based equity mutual funds and exchange-traded fund eclipsed their active equities rivals for the first time. That gap has since exploded to $285 billion through October, according to Morningstar Inc. data.

The shift has forced stockpickers to close, merge, or look for corners of the market where index tracking can be beaten. That’s where Ringby’s strategy fits in. Using data from 2006 to 2019, Bernstein Research has found that money managers who consistently outperform trade less, have higher tracking errors—a technical term for the degree to which funds tend to diverge from their underlying benchmark—and more concentrated portfolios. Ringby’s EQT Public Value Fund, which has more than quadrupled assets since opening to outside investors in 2018, typically buys a stake of up to 25% in a company, joins the board of directors, and works with the business to drive change to lift share prices. That’s an approach similar to activist investors but without the fireworks that usually follow such campaigns. “For us, it is a must to run a concentrated portfolio,” Ringby, 40, says from his office in Stockholm in November. “We avoid investing into companies with underlying risks we can’t control and join the board of all our portfolio companies to drive our value-creation agenda.” Ringby’s fund is somewhat unconventional in that private equity firms usually don’t invest in publicly listed companies. It’s the only public equity strategy run by EQT. Since September 2018, Ringby’s fund has targeted European companies in sectors as varied as technology and media, telecommunications, and health care. After “deep and detailed” diligence, it’s invested in the stocks of 11 companies over the period with market values of up to €5 billion ($6.1 billion). The fund’s remaining eight investments include bets on e-commerce company BHG Group AB and engineering services company AF Poyry AB. A spokesman for EQT declined to comment on its fund’s performance. Concentration Risk Ringby's strategy is not without risk—there is little margin for error. A sector can hit a cyclical rough patch, or a single large bet could wipe out years of gains; the fund may start to see withdrawals, forcing it into fire sales; or market volatility as seen in early 2020 could lead to sharp losses. Activist investor Chris Hohn’s The Children’s Investment Fund, which bets on a relatively smaller number of companies, lost about 19% in March, the worst monthly loss since it started in 2004, before rebounding. Even in EQT Public Value’s case, bets such as real estate service provider Adapteo Oyj have suffered declines. The key is to have investors willing to stay for the long term. In Ringby’s fund, 95% of investor’s capital is locked up for at least five years, giving the firm time to ride out unfavorable market conditions. “There are good concentrated managers, and there are bad ones,” says Tom Whitelaw, a director of equity ratings at Morningstar. “Given the additional risk, a few wrong calls in a concentrated fund can blow it up.” Managers are under increasing pressure from investors to perform and justify their high fees. Passive funds typically charge 10¢ a year per $100 of assets or less, compared with 70¢ or more for active ones. But when it comes to performance, only about 24% of all active funds in the U.S., the largest funds market in the world, topped the average of their passive rivals over the decade through June, according to Morningstar. Even the most active hedge funds are facing demand for change. Five years ago, industry heavyweight Druckenmiller called diversification a “misguided concept,” and that’s when he advised investors to “bet the ranch” if they saw something exciting. In 2017, billionaire macro trader Alan Howard started a hedge fund to take bigger bets. It surged more than 100% earlier this year amid the coronavirus pandemic-fueled market chaos. Ringby, who previously worked at Boston Consulting Group, has a 20-member team at EQT, which has grown internationally since its inception in 1994. The firm has added venture capital, real estate, and infrastructure to its repertoire. EQT is backed by one of Sweden’s most powerful and wealthy families, the Wallenbergs, who own 18%. It has raised more than €75 billion for investment funds and is one of the largest publicly traded private equity firms in Europe. “The EQT brand name opens a lot of doors,” says Ringby, who has degrees in economics and business administration as well as in industrial engineering and management. His fund shuns public statements or media briefings when pushing for change. Strategies include replacing board members, shutting down unproductive units, and carving out noncore divisions via a trade sale or initial public offering. Ringby says the fund can also use in-house advisers to help portfolio companies with brand building and e-commerce. The fund never bets against a company and doesn’t invest in ones they see struggling. If Ringby’s team thinks it’s not aligned with a company, it simply moves on to pick another business. “It is quite resource-intense to do this, but it creates a lot of returns,” Ringby says, pointing to his large team and adviser networks that help EQT run effective due diligence on target companies. With passive funds becoming ever larger shareholders of companies, such an approach is critical to hold companies to account, especially for the remaining active investors who might not have the same level of engagement with management. It also pacifies investors who are demanding a hands-on approach and added value from their portfolio managers. “Positively differentiating themselves from the index is obviously a key ploy,” Whitelaw of Morningstar says on the survival strategy of active managers. “Gone are the days of investors being willing to pay 10 times the cost of a passive fund for a very indexlike portfolio.” Kumar is a hedge funds reporter and Robertson is a private equity and asset management reporter at Bloomberg News in Londo