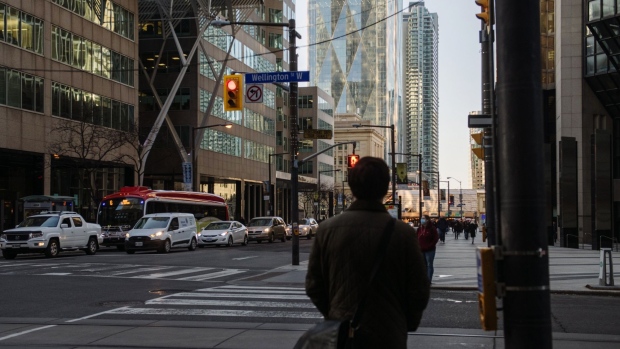 A pedestrian waits to cross at the corner of Bay Street and Wellington Street West in the financial district of Toronto, Ontario, Canada, on Thursday, March 25, 2021. Premier Doug Ford said further lockdowns could happen as a government agency that tracks hospitalizations reported the biggest single-day jump in admissions of patients to intensive care since the pandemic began, CBC reports. Photographer: Galit Rodan/Bloomberg , Bloomberg

The budget unveiled by Canadian Prime Minister Justin Trudeau’s government on Monday includes a tax provision that could affect enterprises that rely heavily on debt financing, including private-equity firms and natural-resource companies.

The change affects tax deductions that certain businesses can take for the interest they pay on loans. Trudeau’s government wants to limit those deductions to an amount equal to 40% of a company’s earnings starting in 2023, and 30% after that. It estimates the measure would raise C$5.3 billion ($4.2 billion) in additional revenue over five years.

The measure is meant to prevent companies from minimizing their tax burden by having their Canadian units hold a disproportionate amount of debt. Several other countries in the Group of Seven and European Union are introducing similar limits on interest deductibility as part of a tax-fairness plan by the Organization for Economic Cooperation and Development.

“This strengthening of the rules on interest deductibility will ensure that large companies pay their fair share and bring Canada in line with other jurisdictions, including all our G7 peers,” the budget proposal said.Private-equity and real estate firms rely heavily on debt financing for acquisitions, and miners and oil producers borrow heavily to pay for capital projects.The measure wouldn’t affect companies with less than C$15 million of taxable capital employed in Canada or net interest expenses of C$250,000 or lower.Interest expenses above the cap could be carried forward for as long as 20 years or backward for as long as three years.Because the proposal is based on net interest expenses, it would exclude financial institutions like banks and insurance companies, which typically earn more income from interest than they pay out in expenses. The government said it would consider “targeted measures” to address concerns of excessive interest deductions by banks and insurers.

The Trudeau budget also proposes measures to tighten controls over so-called “hybrid mismatch arrangements” that multinational companies use to exploit differences between Canadian and international tax laws. Those proposals would add C$775 million in revenue over four years, starting in 2022-2023.