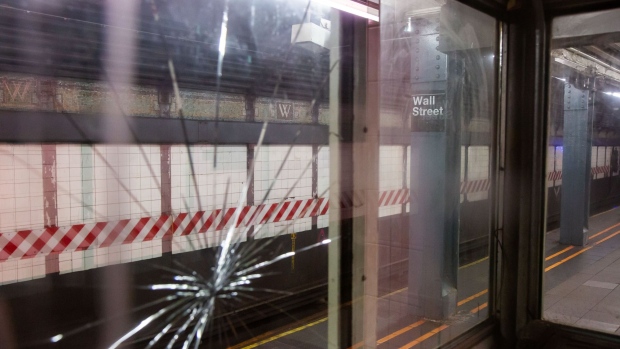 The glass of a security booth shattered at a Wall Street subway station near the New York Stock Exchange (NYSE) in New York, US, on Tuesday, Jan. 3, 2023. US stocks fell as losses in Apple Inc. and Tesla Inc. weighed on the S&P 500 and the tech-heavy Nasdaq 100. Photographer: Michael Nagle/Bloomberg , Bloomberg

(Bloomberg) -- The private equity industry is waking up to a reckoning after more than a decade of stratospheric growth fueled by cheap debt and a relentless flow of investor capital.

That’s according to at least half a dozen private equity dealmakers and investors at the industry’s first major symposium of the year in Cannes on the French Riviera, who gathered against a backdrop of stubborn inflation, higher interest rates and a tough market for new investments.

Firms have so far been reluctant to reflect the impact of these economic headwinds when valuing the assets held in their funds, according to Imogen Richards, global head of Pantheon Ventures’ investment structuring and strategy team.

Paulo Eapen, the head of Blackstone Inc.’s private credit operations in Europe and Asia-Pacific, told attendees at a panel discussion that the rising cost of living will weigh on business performance and dealmaking.

“In terms of just the macro and company performance, I think it will be much more muted as people capture the inflationary pressures,” he said. “Private equity M&A activity I think will be dampened.”

Concerns around portfolio company performance were not the only challenges up for discussion in the south of France, with private equity firms struggling to secure the debt financing they need to do big deals and juice returns and facing more competition when raising funds.

The chief economist at German insurer Allianz SE, Ludovic Subran, said the industry had “nowhere to hide” when markets turned last year. “The private equity world has not been immune or has not defied gravity,” he said.

Banks pulling back from lending on buyouts was described as a “new reality” by Francois Jerphagnon, head of Ardian Expansion, in an interview with Bloomberg TV. This will open up an opportunity for private credit funds to step in, others said.

Blackstone’s Eapen said private credit providers are in “the middle of a golden age” and that last year had been one of his business’s biggest ever for deploying capital.