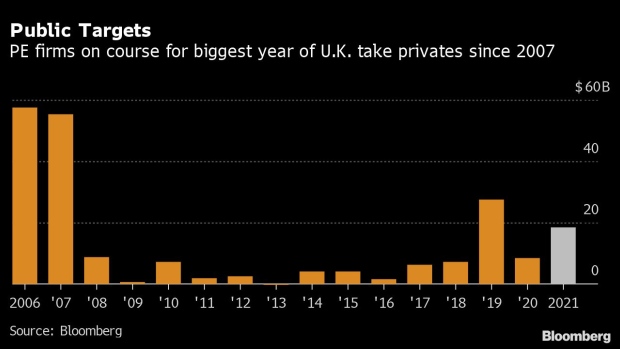 (Bloomberg) -- Private equity firms are snapping up U.K. companies at a rate not seen since before the 2008 financial crisis.

Buyout firms have spent $18.3 billion on takeovers of publicly-traded British targets this year, according to data complied by Bloomberg. At this rate of investment, they will surpass the $27.5 billion of such transactions struck in 2019, which was a post-crisis high, the data show.

The tally has been fueled by a surge of take-privates in May, the latest of which came Wednesday when Carlyle Group Inc. said it would buy drugmaker Vectura Group Plc for about 958 million pounds ($1.4 billion) in cash.

Clayton, Dubilier & Rice also struck a deal for UDG Healthcare Plc at 2.6 billion pounds. These deals all came after a brief lull in U.K. take-privates in April.

Private equity firms remain flush with record amounts of unspent investor money and continue to come to market to raise new funds. Buyout funds are offering shareholders of their U.K. targets an average 33.2% premium this year, the Bloomberg-compiled data show. That’s the third-highest level of the last 10 years.