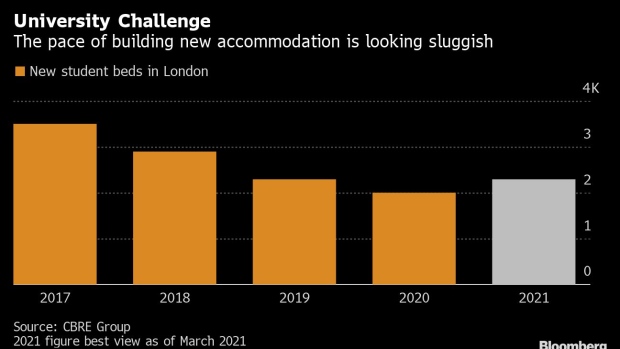 BRENTFORD, ENGLAND - OCTOBER 19: A general view of some of the student accommodation blocks within the Paragon Residential development which have been placed on a mandatory evacuation order, on October 19, 2020 in Brentford, England. Paragon is a development of six apartment blocks owned by one of London's largest housing associations, Notting Hill Genesis. A recent investigation into the exterior cladding coupled with structural and fire safety issues has led to the association asking residents of the 1059 flats to evacuate while further investigations are made. The estate was developed by Berkeley First, part of The Berkeley Group plc. (Photo by Leon Neal/Getty Images) , Photographer: Leon Neal/Getty Images Europe

(Bloomberg) -- Private equity firms are ramping up their investments in the U.K.’s student accommodation market, pumping hundreds of millions of pounds into a resilient sector with an eye on high rental returns in post-Brexit, post-Covid Britain.

More than one-third of deals for student property in 2021 so far have been financed by private equity, compared to about 15% in total between 2016 and 2019, according to data compiled by real estate advisers Jones Lang Lasalle Inc.

With student application numbers projected to rise by 8.5% this year and purpose-built accommodation oversubscribed, property remains attractive for private equity firms. They are sitting on more than $300 billion for property investments alone and want to broaden their assets beyond offices, retail and hotels -- all badly hit by Covid-19.

The lofty investment ambitions for 2021 sit in contrast to the experiences of students during the pandemic, many of whom have been required to pay full rents while living in lockdown far from university residences. Rent can be as much as 2,000 pounds per month in London.

Private equity investors now own 55,000 student beds, according to a Jones Lang LaSalle analysis of the top ten biggest landlords across the sector. That’s equivalent to 8% of the U.K. total.

That number was boosted one year ago when Blackstone Group Inc. bought iQ Student Accommodation for 4.7 billion pounds -- the U.K.’s largest-ever private property deal. Blackstone said at the time the iQ deal was a vote of confidence in the U.K.

In the 12 months to September 2020 student property returns totaled 4.9%, outperformed over five and 10 years only by industrial property, according to Tim Pankhust, a senior director at CBRE Group Inc. who oversees student accommodation services.

Nevertheless, the sector needs a further 310,000 beds to cater to all first year and international university students, who typically live in purpose-built accommodation, according to student accommodation provider Unite Group Plc. Construction is currently failing to make a significant dent in that gap.

Some landlords shared a measure of their tenants’ pain over the past year of Covid-related lockdowns. Unite, which is the U.K.’s largest accommodation provider, housing 76,000 students across the U.K., took a hit of over 100 million pounds as of mid-March this year after offering rent discounts during lockdowns.

Smaller providers are even more vulnerable, with companies owning two accommodation developments collapsing into administration last month, according to trade publication Bisnow. The two developments, both based in the town of Luton, north of London, were once valued at 35 million pounds, Bisnow said.

Current prices are 10% to 15% below where they would be if there was no pandemic, opening up new opportunities, Ares’ Lamont said. Unite’s shares are still around 20% below their pre-pandemic highs.

Yet more than one-fifth of students were unable to pay their rent in full over the four months to January of this year, according to the National Union of Students. “The government has left students to rely on charitable handouts from universities, huge accommodation companies and private landlords in the form of rent reductions and hardship funds,” an NUS spokesperson said in an emailed response to questions.

The attraction of a traditional British private school and university education has long ensured a steady supply of overseas students, bolstering balance sheets for institutions and accommodation providers. That’s now being challenged in the aftermath of Brexit, with student applications from European Union nations down 40% compared to 2020 levels, according to admissions figures.

Nevertheless, investors still see long-term opportunities. CBRE’s Pankhurst notes that while the pandemic has hit occupancy rates in high-end London, which is particularly reliant on overseas students, investors are looking past short-term issues to a growing potential pool of new students.

Buyers are betting on a coming demographic bulge in the U.K. among university-age students, and a government strategy to boost foreign enrollments after Brexit. The supply shortage is also bolstering rents.

Firms such as Ares are eyeing up student cities outside London. It teamed up with Generation Partners to buy two recently completed developments in the cities of Cardiff and Exeter, with 1,359 beds. The site in Cardiff, Wales was formerly part of a hospital, and boasts a gym, yoga studio and private courtyard.

This is part of a wider trend to professionalize ownership of shared living spaces including student accommodation and retirement homes, said Precis Capital’s Randeesh Sandhu. “Ultimately people are looking at real estate assets that have got income and are institutionally well run,” Sandhu said.

“The U.S. has been very ahead of the U.K. in these areas and the U.K. is playing catch up.”