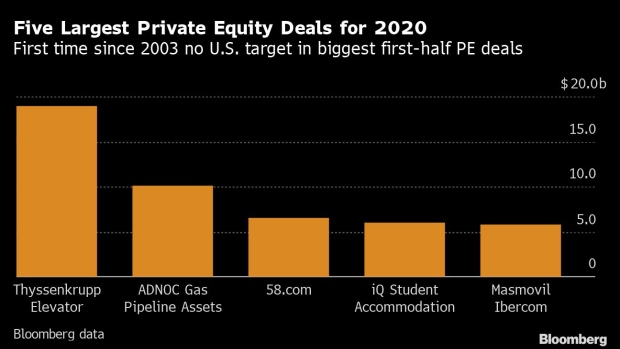 (Bloomberg) -- The U.S. is no longer the center of the private equity universe.

Firms announced $143 billion of deals outside the U.S. in the first half, or almost 60% of the world total, according to data compiled by Bloomberg. That’s on track for the highest full-year proportion in almost two decades. And for the first time since 2003, no U.S. targets were among the five largest deals.

As the U.S. grapples with a pandemic that’s still infecting thousands by the day, private equity firms are taking longer to do business, with dealmakers unable to meet in person and companies in hibernation. Meanwhile, a relative winner is emerging from the crisis: About half of this year’s non-U.S. activity came from Europe.

“This points to the long-term trend for larger deals outside the U.S. as international markets mature,” said Scott Moeller, director of the M&A Research Centre at City, University of London. “It also appears Covid-19 is hitting the U.S. more strongly, which is impacting the ability to do deals despite the large amounts of unspent money available to PE funds.”

Private equity started 2020 with more cash on hand than ever, according to data provider Preqin, and dry powder rose to nearly $1.5 trillion as of June 30 as dealmaking slowed. Capital-raising also dropped in the second quarter as lockdowns kept investors at home.

The first-half shift shows the increasingly global nature of private equity, even as the U.S. still accounts for the lion’s share of transactions. European activity was boosted by the industry’s largest announced deal this year — the 17.2 billion euro ($19.7 billion) purchase of Germany-based Thyssenkrupp AG’s elevator unit by an Advent International and Cinven-led consortium.

Europe’s deal pipeline is looking strong going into the second half. Unilever’s tea unit is up for grabs with Advent, Bain Capital and Blackstone Group Inc. among potential suitors, Bloomberg reported in June. A private equity consortium is among final suitors for EBay Inc.’s classifieds unit, people with knowledge of the matter have said.

Meanwhile, brewing giant Molson Coors Beverage Co. is considering selling about 3 billion euros worth of European assets, in a potential deal that’s expected to attract private equity interest, according to people with knowledge of the matter. A representative for Molson Coors declined to comment.

“Europe experienced the virus earlier and is now coming out of it earlier,” said Ajit Nedungadi, a managing partner at TA Associates. “This improvement gives financial sponsors more visibility on future earnings and increasing confidence.”

In Europe, “sellers, investors, public opinion and politicians better understand the asset class” compared to the 2000s when German politicians derided dealmakers as “locusts”, he said.

While first-half deal flow favors Europe, data can be skewed by one or two super-sized deals, said Delaney Brown, head of private equity funds at the Canada Pension Plan Investment Board.

“The pipeline we are looking at doesn’t show much change when it comes to large deals out of Europe and North America,” he said.

What is clear is that dealmaking has suffered across the board this year. The value of all mergers and acquisitions fell 50% in the first half from a year earlier to the lowest level since 2012.

In the U.S., just 137 M&A deals including private equity were completed in the first half, compared with 188 a year earlier, according to research firm Willis Towers Watson. Europe, however, saw an increase: there were 80 transactions versus 68.

“When you have a larger fund, you don’t want to do twice as many deals. You need to buy larger companies,” he said.