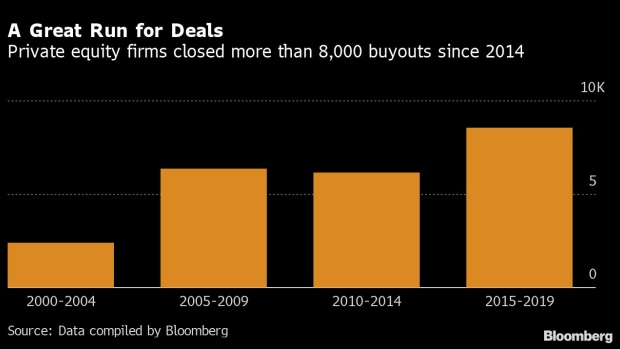 (Bloomberg) -- Private equity’s decade-long debt binge is coming back to haunt it when it comes to obtaining the U.S. government’s coronavirus aid.

Already largely shut out of the popular small business rescue loan program, the industry is now realizing that it’s likely to be excluded from the Federal Reserve’s $600 billion lending initiative because it bars companies that have loaded up on borrowed money. The prohibition strikes at the heart of the buyout-shop business model, where firms saddle the companies they purchase with debt in order to mint bigger profits on their investments.

Though the Fed’s “Main Street” lending facility for mid-size businesses doesn’t specifically preclude private equity-owned companies, executives say they’ve concluded that the tough terms will prevent many of their firms from qualifying. Some politicians and investors say that may not be a bad thing, especially because taxpayer dollars are on the line.

“It’d be teaching irresponsible risk takers to take irresponsible risks” if the Fed signed-off on loans to these companies, said Arena Investors Chief Executive Officer Daniel Zwirn. “You don’t have to be a math genius” to know how highly leveraged private-equity buyouts have been in recent years.

Private equity has used debt as jet fuel for acquisitions because ultra low interest rates have made financing cheap and easy to obtain. It’s a lucrative strategy because the more firms rely on borrowed money, the less cash they have to put up and the higher the returns. As leverage on deals increased and safeguards protecting lenders eroded, regulators began sounding alarms. But the practice continued with many on Wall Street saying it was just pushed to less regulated shadow banks.

Private-equity firms have completed more than 15,000 buyouts since 2010, including almost 2,000 in 2018, data compiled by Bloomberg shows. Private-equity firms that focus on smaller middle-market companies inked a record $500 billion of deals in 2019, according to data provider PitchBook. As of last year, leveraged buyouts had left purchased companies with $119 billion of borrowed money, including debt those businesses may have held prior to the acquisitions, according to Covenant Review data.

In the Main Street program, loans top out at $150 million and will be distributed by banks and then purchased by the Fed. For a business taking out a new loan, its existing leverage can’t exceed four times its 2019 earnings before interest, taxes, depreciation and amortization. If a company wants to add to an existing bank loan, its debt load can’t be more than six times Ebitda.

Private equity firms and their trade association, the Washington-based American Investment Council, have been pressing the Fed to allow more flexibility in assessing who’s eligible. The central bank is expected to release the final rules for the lending facility in the coming days. Right now, the Fed is reviewing a deluge of comment letters on its plans, a response that underscores how desperate Corporate America is for government cash during the economic slump.

If the industry fails to persuade the Fed, it will likely continue pressing Congress to ensure portfolio companies are included in future virus-related stimulus legislation. However, that’s unlikely to be an easy task. Progressive Democratic lawmakers argue that private-equity firms don’t deserve aid because they enrich Wall Street executives at the expense of working people.

Congress already kept most private-equity owned companies out of the $350 billion Paycheck Protection Program, a Small Business Administration effort that launched earlier this month. Though PPP quickly ran out of money, a new infusion of funding is expected to be approved Thursday. The firms, however, have argued that the more than 8 million workers its companies employ shouldn’t be penalized just because of who owns the businesses.

Read More: Private Equity Ends Up Losing in $2 Trillion Virus BillUnlike the small business program, where most of the government-guaranteed loans are likely to be forgiven, the Fed’s Main Street facility offers low-interest funding that is expected to be eventually paid back. Banks will also accept some of the risk, retaining 5% of the loan and selling 95% to the Fed.

Nevertheless, that hasn’t stopped many Democrats and consumer groups from urging that buyout companies be excluded.

“We expect that highly aggressive and sophisticated entities such as large private equity firms will seek out opportunities to channel funding to reward capital owners instead of supporting workers,” Americans for Financial Reform, which advocates for tough Wall Street rules, wrote in a Fed comment letter.

The deciding factor in whether private-equity owned businesses ultimately get loans could be whether the Fed grants flexibility in assessing a borrower’s indebtedness.

In a comment letter sent to the Fed last week, the American Investment Council said banks should be able to “retain some discretion” in calculating leverage. A “one size fits all” method would exclude many companies, the association wrote, noting that would go against lawmakers’ goal of spreading funds far and wide.

“The shared policy imperative is for necessary relief and liquidity to reach all parts of the economy and not unfairly to penalize employees, suppliers, business people and communities that the administration and Congress sought to help,” the the lobbying group wrote.

Private-equity firms are also asking the Fed to modify another restriction on the loans: a prohibition on using the money to pay down existing debt.

Privately, the industry complains that the Fed’s leverage limits are taking aim at a practice that the central bank itself has encouraged through its own monetary policy. Since the 2008 economic crisis, interest rates have remained low and are currently at zero -- a decision that has encouraged borrowing by corporations of all sizes.

Low rates have also pushed investors to buy risky assets in an effort to generate higher returns. That has contributed to the flood of money into assets such as collateralized loan obligations, securities containing loans to extremely indebted corporations. Private equity owns many companies whose loans have been packaged into CLOs.

The explosive growth of the leveraged-lending market in recent years has been a particular worry for the Fed and other regulators, due to concerns that banks might end up sitting on piles of soured loans and that a wave of borrowers could default, magnifying the impacts of a recession.

The Fed and other agencies even issued a standard in 2013 for what they considered safe leveraged lending, though they stopped enforcing it three years ago amid the Trump administration’s rollback of regulations.

Besides the limit on debt and the requirement that companies won’t use cash to pay down previous loans, the Fed’s new lending program sets other constraints that could be unwelcome for private equity. Borrowers must attest that they’re making reasonable efforts to retain employees and that they will adhere to limits on executive compensation and buying back shares.