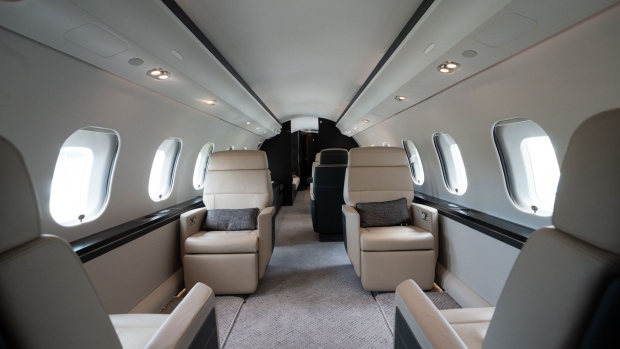 (Bloomberg) -- Vista Global Holding Ltd., a private aviation provider that competes with Warren Buffett’s NetJets, is in talks to go public through a merger with a special purpose acquisition company, according to people familiar with the matter.

A transaction could value Vista at more than $10 billion including debt, said the people, who asked not to be identified because the information is private.

The company has projected 2021 earnings before interest, taxes, depreciation and amortization of about $450 million, a person briefed on the matter said. Terms of a potential deal haven’t been finalized, and the identity of the blank-check firm in talks with Vista couldn’t immediately be learned.

Vista’s chairman and majority owner is Swiss billionaire Thomas Flohr, who started in 2004 with just three planes. Its business is built around VistaJet, which has a fleet of more than 70 aircraft adorned with the firm’s hallmark silver and red livery, according to its website. Rhone Capital invested in the private jet firm in 2017 at a valuation of more than $2.5 billion.

Dubai-based Vista in 2019 agreed to buy U.S. rival JetSmarter in a deal that gave Clearlake Capital and Jefferies Financial Group Inc. stakes in the combined company. It agreed to acquire XOJET in 2018, Red Wing Aviation in 2020 and Apollo Jets in March to add customers and new services.

A Vista listing could benefit from rising interest for private jets amid the pandemic as the wealthy continue traveling while minimizing potentially risky contact with others. Still, the volume of SPAC deals have slowed from record highs amid backlogs in financing and an oversupply of such vehicles.

Representatives for Vista, Clearlake, Rhone and Jefferies declined to comment.

Vista in April said it received the first of two Global 7500 aircraft, which it describes as the largest and longest-range business jet. It has also ordered ten Challenger 350 planes from Bombardier Inc. amid “growing and urgent demand” from executive travelers.

The company has partnered with athletes including golfer Phil Mickelson and Formula 1 drivers Charles Leclerc and Carlos Sainz to attract high-end clientele.

Another private jet operator, Wheels Up Partners Holdings LLC, agreed in February to go public through a merger with Aspirational Consumer Lifestyle Corp., a Singapore-based SPAC.