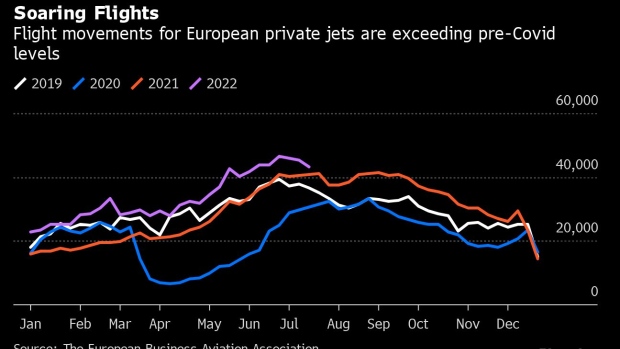 SUN VALLEY, IDAHO - JULY 04: A private jet is seen on the tarmac at Friedman Memorial Airport ahead of the Allen & Company Sun Valley Conference on July 4, 2022 in Sun Valley, Idaho. The world's most wealthy and powerful businesspeople from the media, finance, and technology will converge at the Sun Valley Resort this coming week for the exclusive conference. (Photo by Kevin Dietsch/Getty Images) , Photographer: Kevin Dietsch/Getty Images North America

As Europe grapples with a summer of travel chaos, the wealthiest are increasingly taking matters into their own hands.

Private-jet use has surged by almost a third in recent months compared to pre-pandemic levels, stretching airport capacity from Ibiza to Mykonos and stoking a political backlash in France.

London logged the most private flights -- more than 12,000 in July -- while Naples, Amsterdam and Berlin saw the biggest increases in private traffic among the most popular airports from 2019 levels, according to data compiled by the European Business Aviation Association.

The surge comes as Europeans, eager to travel as Covid restrictions were lifted, flocked to airlines that have struggled to add back staff they shed during the pandemic. British Airways Plc, Deutsche Lufthansa AG and other major carriers have cancelled tens of thousands of intra-European flights this summer amid the worker shortage.

“The level of convenience is just incomparable when you’re relying on scheduled airlines that have not put their game back together,” said Richard Koe, managing director at aviation consultancy WingX. The number of people flying private for the first time has grown by as much as 40%, he said.

Some European CEOs have made the switch to avoid the travel disruptions, as have many well-heeled American travelers enjoying the dollar’s recent gains vis-a-vis the euro. North America made up the biggest proportion of international arrivals in Europe.

The rapid growth has sparked a political storm in France over private jets’ carbon emissions as the country tries to meet its climate targets. In an Aug. 20 interview with Le Parisien, Transport Minister Clement Beaune said he wants to require private jets to make flight details public and set guidelines for their use when rail or commercial air options are available.

In the UK, where tabloids have long called out celebrities, royals and others for using private jets, the shift is also drawing scrutiny. With soaring inflation and a cost-of-living crisis bearing down on the lower and middle classes, the jet surge has become a key point of economic contrast in the country.

London reported 37% more private flights in July than in the same period in 2019, while Paris saw a 43% increase, according to the data. Overall in Europe, private traffic rose almost 30% from pre-pandemic levels to nearly 179,000 flights.

The numbers are even more striking in light of the drop in air traffic from Russia following the war in Ukraine and steep international sanctions. In July, Moscow reported just 354 private flights, a fraction of the 1,862 flights logged three years ago.

Private aviation has had its own set of disruptions. Many jets, for instance, are out of action due to maintenance delays caused by supply-chain issues in China.

“People used to call 24 or 48 hours ahead to get an aircraft to Ibiza,” said Isabelle Clerc, head of sales at Aeroaffaires, a network of private jet operators in Europe. “That wasn’t a problem last year, but this year if you haven’t booked a week before you can forget it.”

Prices have risen accordingly, driven not only by the lack of planes but also by a 73% rise in jet fuel prices since last summer. Flying private from Paris to Mykonos now costs about 25,000 euros ($24,993), almost twice as much as a year ago, according to Aeroaffaires.

With a possible global recession on the horizon, the outlook is unclear. WingX’s Koe said the current tightness in the private-jet market could continue if airlines are forced to continue cutting flights into the winter.

“Even if we had a very good year, that doesn’t mean it’s going to increase, increase and increase again,” Clerc said. “There will be a stabilization, and this autumn and the next winter will not be easy periods.