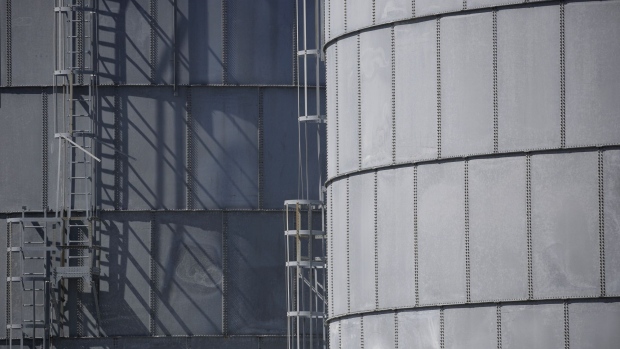 Storage tanks located near a dock for Hornbeck Offshore Services, Inc. oil industry support vessels in Port Fourchon, Louisiana, U.S., on Thursday, June 11, 2020. Oil eclipsed $40 a barrel in New York on Friday, extending a slow but relentless rise that’s been fueled by a pick-up in demand and could signal a reawakening for U.S. shale production. Photographer: Luke Sharrett/Bloomberg , Bloomberg

(Bloomberg) -- China’s cooling demand is continuing to wreak havoc on the physical oil market in Asia, with Iraq’s prized Basrah Light crude sold at a discount to its official selling price for the first time since 2017.

BP Plc and China National United Oil Corp. both sold prompt cargoes of the medium-sour crude for August loading at a steep discount, according to traders with knowledge of the matter. That follows the recent sale of other grades from Russia and the U.A.E. at lower prices, with Chinese purchases muted after a record buying spree and consumption slipping due to massive flooding.

Middle Eastern producers such as Iraq and the United Arab Emirates had banked on robust consumption from Asia for its more sulfurous and dense oil, boosting their official selling prices for cargoes shipped in August. However, China’s independent refiners have started to ease processing after rapidly rebounding from a virus-induced demand slump, while state-run giant Sinopec is planning to trim operating rates this month due to flooding along the Yangtze River.

Basrah Light is also facing additional headwinds. While most Middle Eastern producers are seeking buyers for September loading cargoes, the Iraqi grade is being sold for August, exposing it to any near-term demand drop. The crude is also among varieties held in storage by China’s International Energy Exchange that could be resold into the market, giving buyers alternative supply options.

BP sold Basrah Light at about 80 cents a barrel below the grade’s official selling price, while China National United Oil Corp., known as Chinaoil, sold a cargo at a discount of 40-to-50 cents, according to traders who asked not to be named as the information is confidential.

The premium of Oman crude to Dubai swaps -- a measure that signals the strength of Middle Eastern barrels in the Asian spot market -- slipped to 96 cents a barrel as of 4:30 p.m. in Singapore on Thursday, compared with $1.30 a week earlier, according to data compiled by Bloomberg.