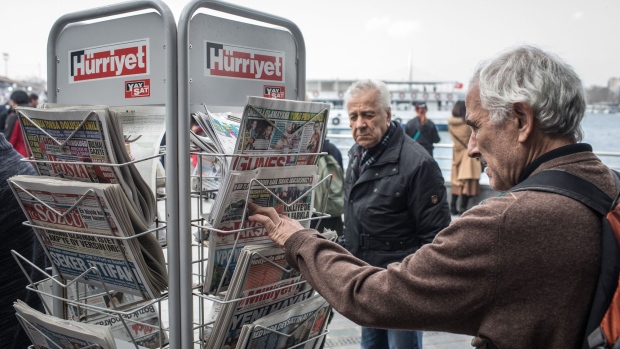 ISTANBUL, TURKEY - MARCH 23: A man looks at newspapers at a news stand on March 23, 2018 in Istanbul, Turkey. The Government of Turkish President Recep Tayyip Erdogan passed a new law on March 22 extending the reach of the country's radio and TV censor to the internet. The new law will allow RTUK, the states media watchdog, to monitor online broadcasts and block content of social media sites and streaming services including Netflix and YouTube. Turkey already bans many websites including Wikipedia, which has been blocked for more than a year. The move came a day after private media company Dogan Media Company announced it would sell to pro-government conglomerate Demiroren Holding AS. The Dogan news group was the only remaining news outlet not to be under government control, the sale, which includes assets in CNN Turk and Hurriyet Newspaper completes the governments control of the Turkish media. (Photo by Chris McGrath/Getty Images) , Photographer: Chris McGrath/Getty Images Europe

(Bloomberg) -- The owner of Turkey’s biggest media empire, a group loyal to President Recep Tayyip Erdogan, is in talks to restructure about $1.5 billion of loans that include funds used to finance its acquisitions of several newspapers and television stations, according to people with knowledge of the matter.

Backed by TC Ziraat Bankasi AS, the country’s biggest lender, Demiroren Holding AS paid almost $1 billion to Dogan Sirketler Grubu Holding AS in 2018 to buy outlets such as mass-circulation Hurriyet daily and CNN Turk, which often faced accusations of bias against the government.

Demiroren, which has interests in real estate, energy, betting and the lottery business, has also borrowed from other lenders including state banks, bringing the total amount under negotiations for restructuring to $1.5 billion, the people said, asking not to be named because the deliberations are confidential.

The Istanbul-based group is negotiating with Ziraat after originally borrowing around $700 million from the state lender for the acquisition of media assets, they said. Adding accrued interest, the amount to be restructured has reached $850 million, said two of the people.

A deal would help Demiroren cope with strain from declines in circulation and viewership at the hands of the internet and as a weak lira makes it harder for borrowers to repay hard currency loans. Hurriyet, once among Turkey’s most profitable and popular outlets, has also seen its appeal erode since Demiroren took charge and effectively turned it into a government mouthpiece.

The Turkish currency has depreciated by about half against the dollar since Demiroren acquired the assets.

The Demiroren family’s company bought the outlets from billionaire Aydin Dogan, founder of Dogan Holding. It’s a group Erdogan once described as standing for “old Turkey,” referring to the secular establishment whose influence the president promised to curtail when he assumed power nearly two decades ago.

The remainder of the loans Demiroren needs to restructure went toward the financing of other businesses and transactions such as its acquisition of operational rights of national lottery company Milli Piyango with Italian partner Sisal SpA and sports betting firm Iddaa with Scientific Games Corp. Demiroren also controls the state lottery company in Azerbaijan.

Demiroren’s takeover of the media assets followed an easing of tensions between Dogan and Erdogan over his group’s coverage, whose criticism of the ruling party softened after being levied a tax fine of $3.3 billion in 2009. The thaw culminated in Erdogan’s appearance on CNN Turk on the night of a coup attempt against him in 2016, when he urged his supporters to take to the streets.