Prices paid to U.S. producers rose in June by more than expected, indicating pressure is mounting on companies to pass along higher costs to consumers.

The producer price index for final demand increased 1 per cent from the prior month and 7.3 per cent from June of last year, Labor Department data showed Wednesday. Excluding volatile food and energy components, the so-called core PPI also rose 1 per cent, the most on record, and was up 5.6 per cent from a year ago. 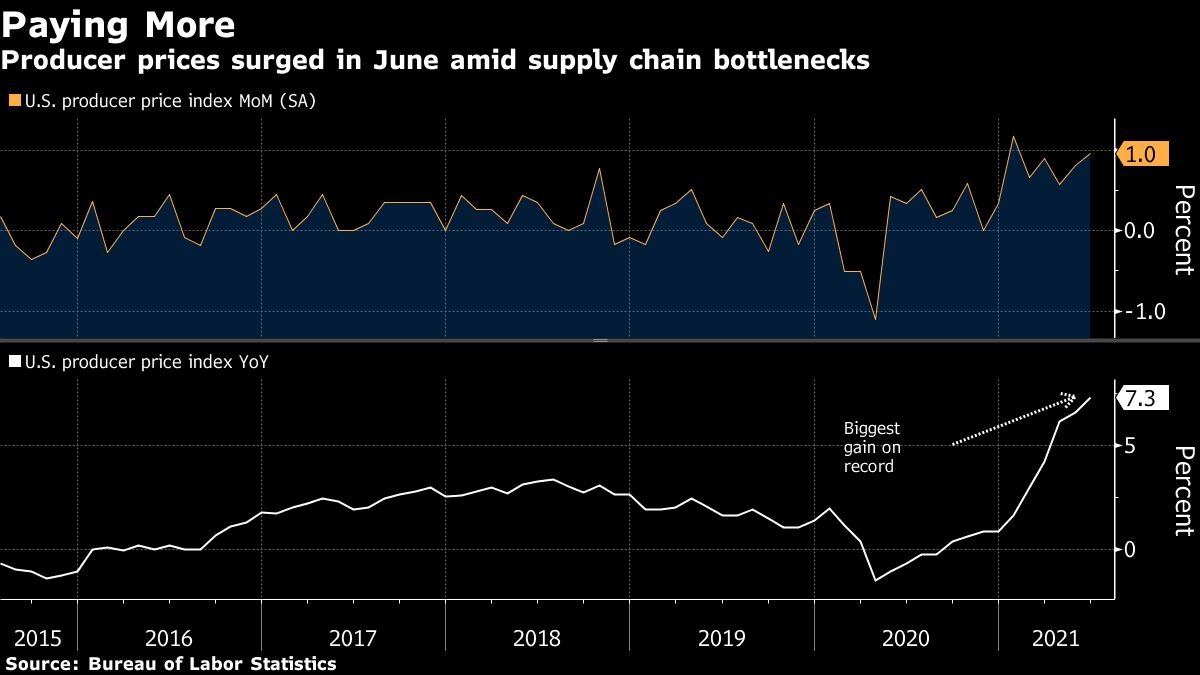 The median forecasts in a Bloomberg survey of economists called for a 0.6 per cent month-over-month advance in the overall PPI and a 0.5 per cent increase in the core figure. The annual increases were the largest in data back to 2010.

The PPI, which tracks changes in the cost of production, has accelerated at a faster pace than expected in recent months due to higher commodity prices and complications with global supply chains. Challenges in hiring skilled workers have also put upward pressure on wages.

The increases in production and labor costs help explain why the pace of consumer inflation has exceeded economists’ estimates in each of the last four months.

A report Tuesday showed the consumer price index surged in June by the most since 2008. The increase was primarily in categories associated with reopening, including hotel stays, car rentals and airfares.

Federal Reserve officials have said upward pressure on prices is likely to be transitory, but some investors worry the recent gains will lead to more persistent inflation.

“Strong demand in sectors where production bottlenecks or other supply constraints have limited production has led to especially rapid price increases for some goods and services, which should partially reverse as the effects of the bottlenecks unwind,” Fed Chair Jerome Powell said Wednesday in prepared remarks to lawmakers.

The S&P 500 rose, the 10-year U.S. Treasury yield retreated below 1.4 per cent and the dollar declined after Powell’s remarks.

The PPI report showed prices for goods increased 1.2 per cent after a 1.5 per cent advance in the prior month, while the cost of services rose 0.8 per cent, the most since the start of the year. Almost 60 per cent of the overall PPI advance was due to services, according to the Labor Department.

The increase in the costs of services reflected growth in margins received by wholesalers and retailers.

Liquefied petroleum gas, plywood, aluminum base scrap were among goods that climbed by double digits from a month earlier.

Producer prices excluding food, energy, and trade services -- a measure often preferred by economists because it strips out the most volatile components -- rose 0.5 per cent from the prior month and increased 5.5 per cent from a year earlier. The annual gain was the largest on data back to 2014.

In an earnings call Tuesday, packaged food company Conagra Brands Inc. reported a 8.6 per cent increase in the cost of goods sold for its most recent quarter, with expectations for a rate of about 9 per cent for fiscal year 2022.

“The bulk of this inflation can be attributed to continued increases in the cost of edible fats and oils, proteins, packaging, and transportation,” Chief Financial Officer David Marberger said on the call.