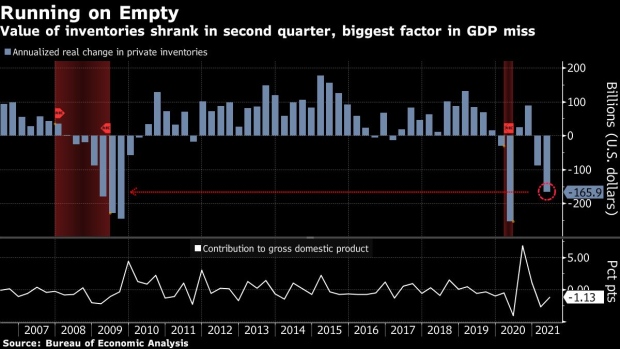 Parked trucks at the Port of Oakland. Shipping delays have led to drawdowns in inventories. Photographer: David Paul Morris/Bloomberg , Bloomberg

(Bloomberg) -- Producers couldn’t keep up with supercharged consumer demand in the U.S. last quarter, and it’s unclear when supply constraints will ease.

Materials shortages and shipping delays led to outsized drawdowns in inventories as companies scrambled to meet one of the strongest paces of consumer spending since the 1950s and robust growth in business purchases of equipment. As a result, the government’s initial tally of second-quarter economic growth missed by a long shot.

The value of inventories shrank an annualized $166 billion last quarter, the second-worst decline in nearly 12 years.

Looking ahead, it’s hard to tell when supply chains may return to some normalcy, as firms race to restock and try to get ahead of any further materials price hike and shortages.

“Given they are global in nature, many of the supply chain and logistics bottlenecks could be more persistent than many have been assuming, and we anticipate them weighing on current quarter growth in consumer spending,” Richard Moody, chief economist at Regions Financial Corp., said in a note.

A deeper dive into the inventories data from the second-quarter GDP report shows sizable drawdowns at manufacturers and retailers. Inventories shrank by $51.5 billion at factories, the largest decline in records to 1997.

The value of durable goods in stock also decreased sharply and likely reflected the auto industry’s production cutbacks that stem from a shortage of semiconductors.

“Given the strength of our product lineup and the demand we see, we expect to have a relatively strong pricing power for the new foreseeable future,” he said.

The GDP figures “embody the predicament facing the U.S. economy, which is that the supply side of the economy has simply been unable to keep pace with demand, thus begetting significantly faster inflation,” Moody wrote.