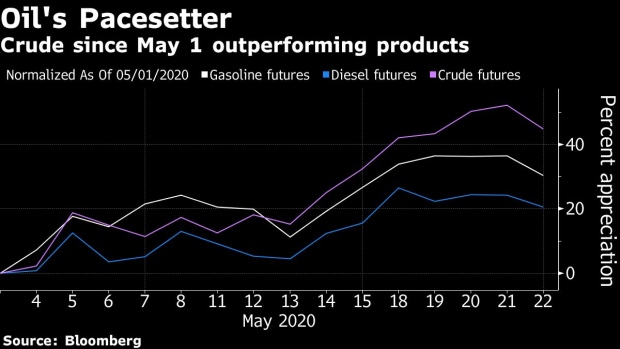 The silhouettes of pumpjacks are seen above oil wells in the Bakken Formation near Dickinson, North Dakota, U.S., on Wednesday, March 7, 2018. When oil sold for $100 a barrel, many oil towns dotting the nation's shale basins grew faster than its infrastructure and services could handle. Since 2015, as oil prices floundered, Williston has added new roads, including a truck route around the city, two new fire stations, expanded the landfill, opened a new waste water treatment plant and started work on an airport relocation and expansion project. Photographer: Daniel Acker/Bloomberg , Photographer: Daniel Acker/Bloomberg

(Bloomberg) -- Returns from turning oil into fuels are lagging behind crude’s jump, signaling that prices are still vulnerable and demand may not be recovering fast enough to justify the rally.

Crude futures have soared 73% in May, rebounding from their historic crash below zero just over a month ago, helped by production cuts across the globe after the coronavirus crisis crushed demand. Prices have also been helped by optimism that easing pandemic-related lockdowns will lead to a recovery in consumption. However, refined products haven’t been able to ride that wave.

Evidence can be found in the spread between U.S. benchmark West Texas Intermediate oil and combination gasoline-diesel output, or the so-called 3-2-1 refining margin. That hasn’t closed above $11 a barrel since May 12, and is languishing over $1 below its 50-day average, data compiled by Bloomberg show.

“Crude outrights and differentials have advanced on the back of swift curtailments, but products have been unable to keep up with the advance,” said Stephen Wolfe, an analyst at industry consultant Energy Aspects. “End-user demand has not recovered quickly enough” and fuel stockpiles are still high, he said.