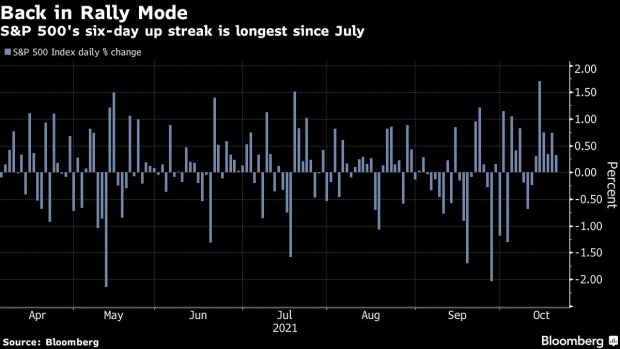 (Bloomberg) -- Profit growth for U.S. companies remains strong enough to power stock market gains through much of next year, according to Bernstein’s Beata Kirr.

Companies are seeing a “substantial” rebound in earnings, and while growth won’t approach the plus-40% levels of prior and year-ago quarters, 2022 could see a 9% improvement, she said.

“That’s still positive and that’s one of the fundamental underpinnings that’s really driving the equity market forward,” Kirr, co-head of investment strategies at Bernstein Private Wealth Management, said on Bloomberg TV and Radio on Wednesday. “This is going to be a story of figuring out supply and demand. The demand still appears to be there. Who’s got pricing power is one of the fundamental differentiators this earnings season.”

Pricing power is increasingly important because of the higher costs created by the pandemic’s disruption of the global supply chain. Still, inflation eventually should moderate from its current 5.4% annual level, giving the Federal Reserve room to not raise rates until 2023, she said.

The Bernstein strategist says the broader market will continue to find support from economic growth, which the firm forecasts at 4% in the U.S. and higher globally in 2022.

Already the S&P 500 is having its best reaction to the start of earnings season in the last two years, according to data compiled by Bloomberg. Stocks were up roughly 3.5% in the week through Tuesday and are now within reach of a new all-time high.

By comparison, the first week of second-quarter earnings reports saw the index lose more than 1%. And in September, the S&P 500 fell about 5%, its worst month since the start of the pandemic.

Strong results from companies in the financials sector and elsewhere have helped counter any inflation concerns. Companies comprising about 16% of the S&P 500’s market value have reported already, and earnings are beating estimates by 14%, with more than 80% of companies topping projections, according to Jonathan Golub, chief U.S. equity strategist and head of quantitative research at Credit Suisse Securities.