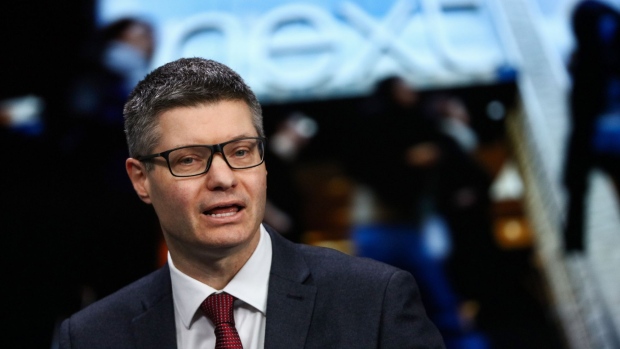 Simon Wolfson, chief executive officer of Next Plc, speaks during a Bloomberg Television interview in London, U.K., on Thursday, Nov. 17, 2016. Wolfson, one of corporate Britain's most prominent Brexit supporters, said he's concerned about the hard-line direction the process has taken and called on the government to maintain Britain's tradition of openness. , Bloomberg

Simon Wolfson, the boss of retail giant Next Plc and a Conservative peer, appeared to blame the Tory government for a crash in the pound and a worsening outlook for UK inflation.

“As we are already seeing, when a government borrows too much their currency will devalue, and stoke inflation next year,” Wolfson said in Next’s half-year results Thursday.

The company said rising inflation was taking its toll on the business, as it lowered guidance for sales and profits. The shares fell as much as 10% in London.

Chancellor of the Exchequer Kwasi Kwarteng rattled markets by announcing a series of unfunded tax cuts during last Friday’s mini-budget. The pound has sunk further sparking a crisis and on Wednesday the BOE said it would start buying long-dated government bonds amid fears of a crash.

Wolfson also spoke about liability-driven investments, the strategies used by some City fund managers that have been blamed for backfiring and causing the BOE to intervene. Next’s treasurer wrote to the BOE to warn that the strategies were “destabilizing”. Next doesn’t have any exposure to LDIs despite receiving many sales pitches because they were “always a time bomb”, said Wolfson.

Read More: The Pension Problem That Threatened to Wreck the Gilt Market

The Next chief executive also said he was now more concerned about inflation next year than this year, acknowledging the challenge of limiting price hikes in the company’s stores.

“It looks like we may be set to have two cost-of-living crises,” he said. “This year, a supply-side-led squeeze, next year a currency-led price hike as devaluation takes effect.”

He added: “We are in no doubt as to the seriousness and scale of that challenge.”

Still, Wolfson urged the Conservative government to pursue its supply-side reforms, calling on Prime Minister Liz Truss to push ahead with “the radical overhaul of our planning system” alongside migration and trade liberalization.

“If those measures are as bold as their demand-side measures then there’s a good chance that growth could pay for the stimulus,” he said later on a phone call. “If not then it will have been a mistake.”

Wolfson also suggested that the government should scrap the proposed HS2 rail project, which is aimed at speeding up train links between London, the Midlands and the north of the country.

(Adds detail about liability-driven investments in fifth and sixth paragraphs.)