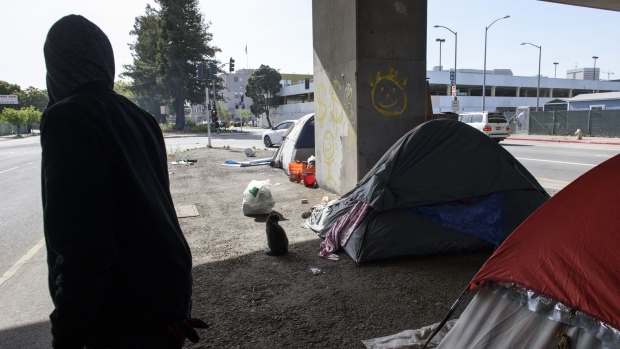 Tents line a sidewalk under an overpass at the 27th and Northgate homeless encampment in Oakland, California. , Photographer: Michael Short/Bloomberg

(Bloomberg) -- A California organization is using a program that pays billions of dollars to for-profit health insurers to provide care for the growing numbers of older Americans living on the streets.

The combination could create a sustainable way to finance improved care for homeless patients and eventually help them get off the streets, said Sachin Jain, chief executive officer of SCAN Health Plan.  SCAN, a Long Beach, Calif. nonprofit Medicare insurer with more than 220,000 members, is launching the care-for-homeless effort with an initial $6 million investment.

Healthcare in Action will work with SCAN and other health plans. Jain also floated the idea of designing special Medicare plans tailored to the homeless population in a medical journal article last year.

About 580,000 Americans lack a safe place to sleep on any given night, according to the latest federal snapshot from early 2020. About 52,000 people in California were chronically homeless last year. The tallies mostly predate the Covid-19 crisis in the U.S. and the eviction moratorium that followed.

Health problems are “both a cause of homelessness as well as an effect,” Jain said. Lack of housing can exacerbate medical problems. People can’t keep medicines like insulin at the proper temperature if they live on the street.

Healthcare in Action will follow the lead of street practices that for decades have provided medical services for the homeless. Michael Hochman, the doctor who will lead the medical group, said it won’t have a bricks-and-mortar space, but will instead work out of mobile clinics. The group expects to have four or five teams to start.

The idea behind Healthcare in Action is to tap into payments Medicare, the federal health program for older and disabled Americans, makes to private health plans through Medicare Advantage. In these arrangements, Medicare plans get a monthly payment from the government for each patient they sign up. The plans are then responsible for that patient’s care as well as total medical expenses. Medicare Advantage covers 24 million people — 43% of Medicare beneficiaries — and paid out to private plans more than $300 billion in 2020, according to the Medicare Payment Advisory Commission.

The amount of payment such plans receive depends on the expected health needs of their patients. While a base Medicare payment might be $10,000 a year,  payment for a typical homeless patient, who tends to have chronic health conditions, might be closer to $25,000, according to SCAN’s data on its own homeless patients.

Today those rates don’t come close to covering typical medical costs for homeless patients, which are driven by hospitalizations and emergency room visits, an expensive setting that’s often not suited to treating their chronic health needs.

“This is a population that obviously has intensive health-care needs,” Jain said.Healthcare companies have attempted to solve this problem before. UnitedHealth has even put some of its most costly homeless patients into supportive housing to improve their health and avert hospital trips. UnitedHealth has since expanded the approach to 18 cities and plans to eventually reach 30, a spokesperson said.

Hochman and Jain hope they’ll be able to improve patients’ health, reduce costs, and eventually help people find stable housing. The group will also identify patients who are homeless while they’re in the hospital, assist in their discharge planning, and try to meet with them soon after. Clinicians including physician assistants and nurse practitioners will work in small teams alongside social workers and “peer navigators,” including people who were formerly homeless.

Healthcare in Action will encourage people to take medications by delivering prescriptions directly to them and using long-acting formulations of drugs that can remain effective for as long as 90 days. It expects to start serving patients next year, serving up to 1,000 people in Los Angeles and Orange County, California, Jain said. The goal is to reach as many as 5,000 or 6,000 patients in the early years, he said.

“We’re going to go out to serve our patients where they are,” including tent encampments and under highway overpasses, Hochman said.