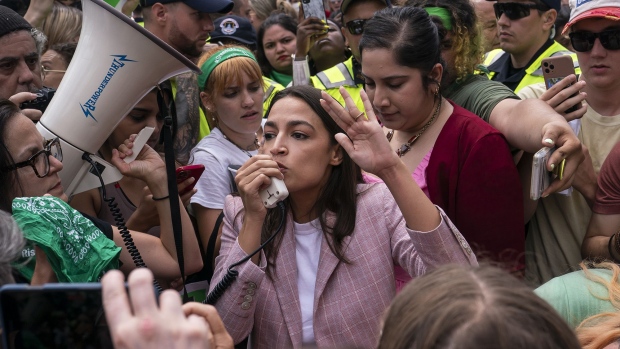 (Bloomberg) -- Liberal Democrats are venting frustration with what they regard as President Joe Biden’s muted response to the end of nationwide abortion rights, revealing an intraparty schism that could hamper Democrats’ prospects in the November midterms.

After the Supreme Court struck down the landmark Roe v. Wade ruling last week, Biden and White House officials have repeatedly stressed there’s little they can do unless more lawmakers who support abortion rights are elected to Congress.

But for progressive stalwarts such as Senator Elizabeth Warren and Representative Alexandria Ocasio-Cortez that’s not enough: They want the president to take dramatic action to ensure access to abortion across the country, even if it means court challenges and legislative battles that the White House would almost surely lose.

That means providing abortions to the public on federal property in states that ban the procedure -- a proposal the White House has dismissed as untenable. They want Biden to overhaul the Supreme Court, either by adding justices or imposing term limits on them or both, and to curtail the Senate filibuster, which enables Republicans to block laws explicitly legalizing abortion nationwide.

“We need a plan of action beyond just urging people to vote,” California Representative Ro Khanna said in an interview. He’s called on Biden to back a bill to set term limits for Supreme Court justices and to cap the number of nominations a president can make in a single term.

“They want an action plan and they want a fundamental reform of the court,” Khanna said of his constituents.

But in the White House, liberals are finding an unreceptive audience. Biden’s press secretary, Karine Jean-Pierre, said Friday in an MSNBC interview that the president does not support adding justices to the court.

The only measures Biden has taken so far are to direct the Health and Human Services Department to make abortion drugs as widely available as possible, and to encourage the Department of Justice to crack down on officials in states that ban abortion if they try to prevent people from traveling to other states to obtain the procedure.

Biden’s call for voters to elect more candidates who support abortion rights belies the White House’s belief that the court’s decision to overturn Roe will energize the Democratic base in November. Yet the push-back from progressives shows a risk for Democrats -- that voters could be discouraged from turning out if they don’t view the party leadership’s response as sufficiently urgent.

Many progressives have called for Biden to explore whether the federal government could provide abortions on property it owns in states that ban the procedure. That would presumably include military bases and Veterans Affairs hospitals.

But administration officials say such a move could put women at legal jeopardy, either from state authorities or if a Republican wins the White House in 2024.

“It’s not, right now, what we are discussing,” Vice President Kamala Harris told CNN on Monday.

“We understand the proposal is well-intentioned, but here’s the thing: It could actually put women and providers at risk,” Jean-Pierre told reporters Tuesday aboard Air Force One. “We’re looking at an array of other options.”

She didn’t elaborate. Biden hasn’t ruled out further executive moves, but has made plain he thinks he has few if any options.

And some progressives think that their own movement’s leaders must reassess their strategy and message after the court’s ruling.

“Frankly, the movement for reproductive choice is going to have to retool itself,” said Steve Goldstein, a former lawyer for the House Judiciary Committee and a civil rights activist in New Jersey. “It will need to speak with one voice, which is not easy to do when you have many different women’s right and reproductive rights organizations. There is not maximum coordination.”

Khanna urged Biden to back a bill he proposed last year that would limit justices’ terms to 18 years and cap the number of appointments in each president’s term. Former President Donald Trump appointed three of the current justices -- one-third of the court -- in just a single term in office. All three voted to overturn Roe.

The legislation stands virtually no chance in the Senate as long as Republicans can filibuster it, but Khanna said its advancement would at least send a signal to Democrats.

Progressives have also indicated they want to see a more animated and emotional response from the White House. Khanna also urged Biden to elevate Warren as a voice on abortion rights.

“Senator Elizabeth Warren’s tone is one that can guide the administration,” he said. “One of the things the president can do is really make Senator Warren more of the point-person for the party on this issue.”

Warren joined outraged protesters outside the court after the draft Roe decision was leaked to Politico in April. She has called for a range of changes, including expanding the court, and has charged that some of the justices who voted to overturn Roe misled Congress during confirmation hearings about their opinions on the 1974 decision and their intentions.

She called on Biden “to make abortion as available as possible with the tools he has, including medication abortion, including using federal lands as a place where abortions can occur.”

But if the White House is going to stick with advocating for more abortion-rights supporters in Congress, Ocasio-Cortez has said Biden should say specifically how many more Senate seats the party needs to enact the protections of Roe into statute, and which states should be targeted for the gains.

“The president and the Democratic Party needs to come to terms with is that this is not just a crisis of Roe, this is a crisis of our democracy,” she said Sunday on NBC’s Meet the Press. “This is a crisis of legitimacy and President Biden must address that.”