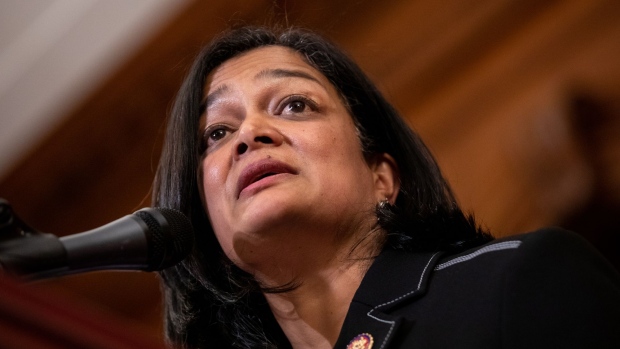 The infrastructure bill has already passed the Senate, but liberals in the House have insisted that Democrats reach agreement and pass a larger tax and spending package that encompasses much of their priorities before voting on the roads-and-bridges measure.

“Progressives will vote for both bills, but a majority of our members will only vote for the infrastructure bill after the President’s visionary Build Back Better Act passes,” Congressional Progressive Caucus Chair Pramila Jayapal, a Washington Democrat, said in a statement.

Pelosi has said she plans to move forward with a vote on the bipartisan infrastructure bill Thursday while Democrats continue to negotiate on the tax and spending package. Leaving an event Tuesday, she declined to comment on Jayapal’s statement.

Moderate Senators Joe Manchin of West Virginia and Kyrsten Sinema of Arizona have opposed that measure’s $3.5 trillion price tag, calling for a significantly smaller package. Biden has scheduled separate meetings Tuesday with both senators in an effort to broker an agreement.

The progressive caucus, which claims 95 members of the House, is using the infrastructure bill as leverage to ensure their priorities remain in the the social spending measure, which Democrats plan to push through under the reconciliation process to avert a Republican filibuster in the Senate.

“This agenda is not some fringe wish list: it is the President’s agenda, the Democratic agenda, and what we all promised voters when they delivered us the House, Senate, and White House.” Jayapal said in the statement.