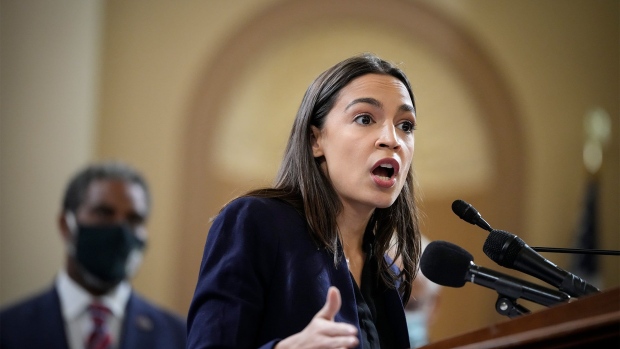 WASHINGTON, DC - OCTOBER 26: Rep. Alexandria Ocasio-Cortez (D-NY) speaks during a news conference to discuss legislation that would strengthen Social Security benefits, on Capitol Hill October 26, 2021 in Washington, DC. The lawmakers discussed their proposed bill, called the Social Security 2100 Act, which would include increased minimum benefits and add caregiver credits for people who have to leave the workforce to care for children or elderly family members. (Photo by Drew Angerer/Getty Images) , Photographer: Drew Angerer/Getty Images

(Bloomberg) -- Progressives Democrats in the House aren’t satisfied that an emerging framework for President Joe Biden’s economic agenda gives them the details they need to clear the way for a vote on a $550 billion roads and bridges bill.

House Speaker Nancy Pelosi emerged from a meeting with Progressive Caucus Chair Pramila Jayapal hopeful that progressives would back the infrastructure package as the outline of a deal begins to emerge on the larger tax and spending package.

Jayapal, of Washington, told reporters she doesn’t want a framework, she wants a bill. She added dozens of progressives have the same stance.

“A mere framework is not enough,” Representative Alexandria Ocasio-Cortez of New York said Tuesday. “We need to have a vote ready for the Build Back Better plan, not a framework. We want to have both of these votes together.”

Amid demands from moderates, Democrats are paring down an economic plan that was originally expected to have a price tag of $3.5 trillion. The new package will be worth less than $2 trillion.

Pelosi said she hoped for votes on the package, named the Build Back Better Act, and the infrastructure bill this week that progressives have been holding out support for until a vote is held on the larger tax and spending plan. But with so many details still to be worked on on the larger plan, having legislation ready for a vote appeared unlikely.

However, when asked about Jayapal’s comment that a framework is not enough, Pelosi said, “Well, I think it is.”

Representative Cori Bush of Missouri replied in a tweet to Pelosi’s comments, “It’s not enough for me. And there are more of us.”