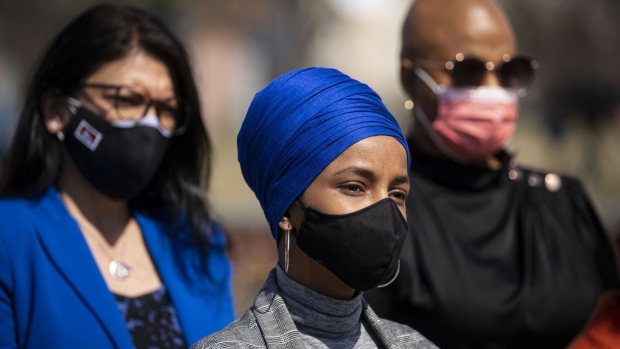 (Bloomberg) -- Progressive Democrats want to require the nation’s largest fossil fuel companies to finance $500 billion in climate efforts over the next decade.

Forty Democrats, in a letter Friday to House leaders, are urging House leaders to create this new climate fund in the $3.5 trillion tax and spending plan that forms the core of President Joe Biden’s economic agenda. Companies affected by the proposal would include Exxon Mobil Corp., Royal Dutch Shell Plc, Chevron Corp., and BP Plc.

“As Congress fleshes out the details of this legislation, we believe there is a crucial opportunity to design revenue-raising measures that not only offset the critical investments we need, but that also align with the values, goals, and urgency with which we must tackle challenges like climate change,” they wrote.

The proposed language would require the fossil fuel producers to make payments based on the percentage of their contribution to global greenhouse gas emissions. It would apply to U.S.- based extractors and refiners of fossil fuels, including subsidiaries of foreign-owned companies.

The group, citing peer-reviewed research, asserts the assessment would produce at least $500 billion over 10 years. The provision would help pay for the package’s overall price tag.

Progressive Democrats have demanded climate change be a priority in the economic plan that Democrats want to push through Congress this fall through a process called reconciliation, which would allow them to avert a filibuster in the evenly divided Senate.

But moderate Democrats like West Virginia Senator Joe Manchin, who has said he disagrees with Democrats who want to target fossil fuels, threaten to derail it. Manchin has called for a “pause” on the economic package, citing rising inflation and national debt.

Representative Jamaal Bowman of New York and Senator Chris Van Hollen of Maryland have pushed for the language in both chambers.

Ninety progressive and climate change-focused organizations, including the Sunrise Movement, 350.org and the League of Conservation Voters, endorsed the plan.

The United Nation’s Intergovernmental Panel on Climate Change issued a report in August that warned the planet will warm by 1.5° Celsius in the next two decades without action taken to curb greenhouse gas pollution. The report’s authors said it is “unequivocal that human influence has warmed the atmosphere, ocean and land.”

The group cited a report by the Climate Accountability Institute that found that around 70% of greenhouse gas emissions between 1988 and 2015 can be attributed to 100 companies.

“Climate change is an emergency, and we know exactly who is responsible: the fossil fuel industry,” Bowman said in an e-mailed statement. “As we finally begin to invest the trillions needed to protect each other, heal our communities, and transform our society for the better, we also need make sure that those companies start paying for their pollution.”