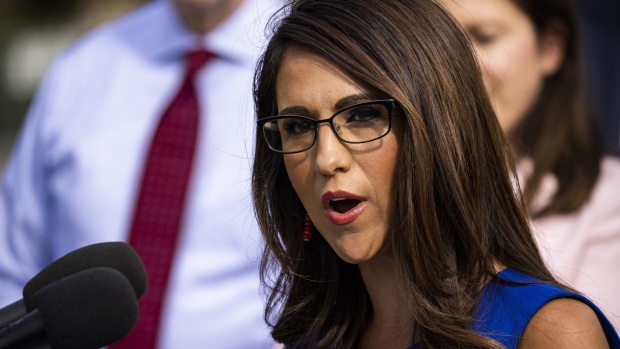 Representative Lauren Boebert, a Republican from Colorado, speaks during a news conference outside the U.S. Capitol in Washington, D.C., U.S., on Thursday, July 1, 2021. Some House GOP members are pushing back against what they perceive as unfair treatment in the 2020 elections by technology companies and their owners. , Bloomberg

(Bloomberg) -- Progressives are urging House Democratic leaders to bring a resolution to the floor to strip Republican Representative Lauren Boebert of her committee assignments over anti-Muslim comments she made against Representative Ilhan Omar.

“Each day that passes without meaningful accountability, we risk normalizing this behavior and endangering the lives of our Muslim colleagues, Muslim staff and every Muslim who calls this country home,” Representative Ayanna Pressley of Massachusetts said Wednesday.

Boebert, a freshman lawmaker from Colorado, sits on the Budget and Natural Resources committees. Her office did not immediately respond to a request for comment.

Pressley, who introduced the resolution, said conversations with House leadership were continuing and all options to hold Boebert accountable should remain open. House Speaker Nancy Pelosi said earlier Wednesday she was not ready to announce any such action.

“I don’t feel like talking about what the Republicans are doing or aren’t doing” about what she called “the disgraceful behavior of their members,” Pelosi said.

In a video clip that attracted attention on Twitter last month, Boebert told supporters of an alleged interaction she had with Omar in a Capitol elevator. She said a Capitol police officer ran toward the elevator.

“Well, she doesn’t have a backpack, we should be fine,” Boebert said. She also referred to Omar as the “jihad squad.” Omar said the encounter never occurred.

McCarthy spoke with Boebert and she tweeted an apology to “anyone in the Muslim community” she offended. She also called Omar, but the telephone conversation ended with Omar hanging up.

Omar issued a statement following the call that said Boebert refused to publicly apologize and instead “doubled down on her rhetoric.”

House Democratic Caucus Chair Hakeem Jeffries said active discussions are underway and he expects Boebert to be held accountable, though it would be “constructive” if GOP leaders acted.

Representative Rashida Tlaib, one of three Muslim members of Congress along with Omar, became emotional during a press conference on Wednesday.

“It’s hard being Muslim in our country right now and this makes it worse,” Tlaib said. “It’s not just hate speech, which is God awful, but it’s also hate speech that’s evoked violence and danger toward a whole people in our country.”

Last month, the House voted to censure Representative Paul Gosar, an Arizona Republican, and strip him of his committee assignments after he posted an altered anime video depicting violence against Representative Alexandria Ocasio-Cortez of New York.