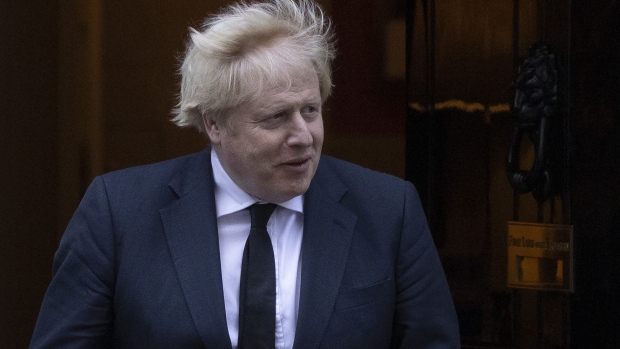 LONDON, ENGLAND - NOVEMBER 23: British Prime Minister Boris Johnson waits to welcome Israeli President Isaac Herzog to Downing Street on November 23, 2021 in London, England. President Herzog, who was elected to his role by the Knesset in June, arrived in the UK on Sunday for a multi-day visit. (Photo by Dan Kitwood/Getty Images) , Photographer: Dan Kitwood/Getty Images Europe

Prominent members of Boris Johnson’s ruling Conservative Party visited the U.K. prime minister in his Downing Street office on Thursday, a meeting likely to raise eyebrows during a period of political turbulence.

The executive of the influential 1922 committee of rank-and-file Tory MPs was walking together back to Parliament following their meeting with Johnson when approached by Bloomberg.

Chairman Graham Brady, asked if the group represented the so-called men in gray suits sent to depose the prime minister -- a well known reference in British politics to the ouster of ex-leader Margaret Thatcher -- declined to comment on what he called a private conversation with Johnson.

Another member of the executive, who asked not to be identified, described the meeting as one of the group’s regular visits and downplayed its significance.

Still, it comes amid growing disquiet in Johnson’s party over a series of missteps and U-turns that have dented the Tories’ standing in the polls. He’s struggling to counter daily reports of squabbling at the top of the government, and recent votes in Parliament show he’s finding it harder to control his MPs.

Johnson faced a major backlash over his attempt to block Parliament’s suspension of a former Tory minister found guilty of paid lobbying, alienated some MPs over a scaled back railway rollout, and triggered questions about his health following a haphazard and rambling speech to Britain’s biggest business lobby in which he compared himself to Moses.

The most recent crisis was triggered when the BBC on Monday cited a “senior Downing Street source” as saying top officials have serious concerns about Johnson’s recent performance.

Even so, there’s no sign of any challenge to his leadership. But if that changes in the future, Brady’s committee -- which take its name from a 1922 meeting of Tory lawmakers which called for the end of the party’s coalition with the Liberals -- will take center stage.

It’s Brady’s job to safeguard any letters of no confidence in the prime minister. If he receives them from 15% of sitting Tory MPs, he is obliged to put Johnson’s position to a vote. The current number of letters, which are safely locked away, is never revealed.