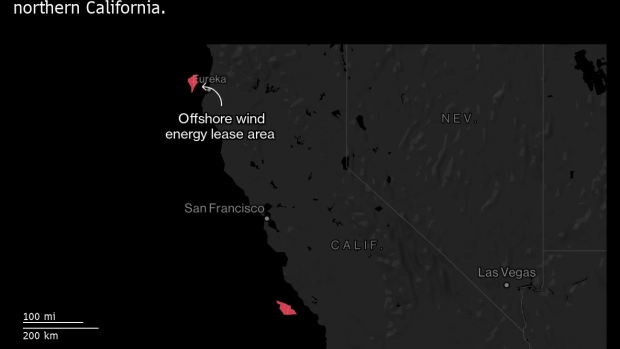 Wind turbines at a wind farm near Highway 12 in Rio Vista, California, U.S., on Tuesday, March 30, 2021. President Biden's $2.25 trillion infrastructure and stimulus blueprint he is set to unveil today, meant to catalyze investments in a clean energy economy and encourage low-emission technology necessary to constrain global warming, would give a 10-year extension to tax credits that have been a boon to wind and other renewable energy projects. , Bloomberg

(Bloomberg) -- Six companies are still vying for the opportunity to install floating wind turbines off the California coast after offering $402.1 million for the tracts Tuesday.

The turnout — just a sliver of the 43 developers that had prequalified to bid in a government auction of those coastal leases — signals some industry caution about the scale of the challenge harnessing renewable power in deep Pacific waters. The sale, which resumes Wednesday morning, is an initial test of the industry’s appetite for offshore wind projects in more costly and difficult terrain.

The estimated 4.5 gigawatts that could be developed under the offshore leases later this decade would help California meet its clean energy goals and balance its grid. California has struggled to meet electricity needs amid tight natural gas markets and a prolonged drought that’s stifled hydropower, but offshore wind is seen as a way to bring more supplies online and complement solar generation that ebbs in the evening.

The leases would use the vanguard of offshore wind technology: expensive floating turbines that haven’t been commercially deployed in the US — and have barely been installed globally.

The sale offers the US a chance to nurture that technology, said Sam Salustro, director of coalitions and strategic partnerships with the Business Network for Offshore Wind. “The technology we’re going to develop for these will be one of the first in the market because it’s so new,” he said before the auction began Tuesday. “It’s a real opportunity to become a leader in an established industry.”

Just 113 megawatts of floating wind capacity has been installed globally through pilot projects off Scotland, Norway and Portugal. But that’s “a rounding error” compared to the more than 50,000 megawatts of total offshore wind installed around the world, noted Timothy Fox, an analyst at ClearView Energy Partners.

Not a ‘Proven Resource’

There’s reason to be a little cautious because “it’s just not nearly as developed and proven a resource,” Fox said. “The viability and commercial capabilities of floating offshore wind are far less clear than traditional turbines connected directly to the ocean floor.”

Bidding on the first day of the sale suggested the market might be responding to the higher risk of the Pacific wind frontier. Unlike recent auctions on the East Coast that benefited from more predictability, California’s bidding is complicated by uncertainty surrounding potential regulatory limits on power prices, technology costs, port construction and policy risks.

At the start of the sale, seven companies were competing for five tracts spanning 373,000 acres (151,000 hectares), two near Eureka in the north and three further south near Morro Bay.

By evening, after 20 rounds of anonymous bidding, six developers were still jostling for the territory. High bids had reached $402 million — or $1,077 per acre — still well below the $2,861-per-acre haul the US government collected for wind leases near North and South Carolina in May.

Analysts and industry leaders didn’t expect results to approach the high-water mark of $8,951 per acre set during a blockbuster February sale of leases between Long Island and New Jersey, which was buoyed by state power-purchase commitments and growing developer confidence about the regulatory environment.

--With assistance from Raeedah Wahid.