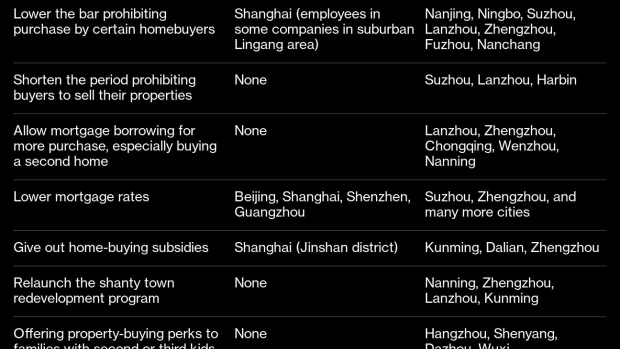 (Bloomberg) -- When Hui Ka Yan headlined a high-profile philanthropic event in 2018, he spoke at length about how he subsisted on sweet potatoes as a child in his home village.

The China Evergrande Group chairman was in his prime -- with $40 billion in wealth, he rivaled Jack Ma as the nation’s richest person. He made a point to attribute his success to the Communist Party. That year, about a fifth of the country’s billionaires hailed from a real estate sector that reveled in rags-to-riches stories like Hui’s.

All that has changed since then. China’s yearlong campaign to control runaway property prices has pummeled its biggest developers, tanking home sales 11 months straight and obliterating $65 billion in wealth for real estate moguls. A Bloomberg Intelligence gauge of Chinese property stocks sank on Monday to a five-year low versus the Hang Seng China Enterprises Index.

“The golden days are over,” said Craig Botham, chief China economist of Pantheon Macroeconomics Ltd. “Property can’t be the engine for economic growth or wealth accumulation. It’s in the past.”

It’s hard to overstate the importance of real estate in China. Accounting for nearly 30% of gross domestic product, the sector is one of the biggest economic drivers. It has produced fabled names like Wang Jianlin, the founder of Dalian Wanda Group Co., underpinning the wealth of the country’s vast middle class and accounting for about 60% of household assets.

For two decades, investing in property was a sure bet. China’s home prices were on an upward trend since the early 2000s, fueling speculation.

Developers were emboldened to take on debt, turning to vast pools of money outside of mainland China. Global investors hungry for higher returns snapped up high-yield bonds. Annual sales of such notes surged from $675 million in 2009 to $64.7 billion in 2020, according to data compiled by Bloomberg. The mounting debt posed significant risk to the financial system.

All of this grew in tandem with China’s widening wealth gap.

The signs of shifting winds came first in 2016. That year, Xi declared that “homes are built to be inhabited, not for speculation.” The pace of regulatory onslaught picked up in 2020 when China introduced the so-called “three red lines,” capping the loans that developers could take on.

It pinched developers across the board and crushed Evergrande. The company, with more than $300 billion in liabilities, defaulted in December after running out of ways to source funding, sending ripples across a dozen builders.

Since the beginning of last year, Chinese developers have defaulted on at least $18 billion of offshore dollar bonds and the equivalent of $2.5 billion of onshore yuan-denominated debt.

Xi’s push for common prosperity -- which emphasizes a more even wealth distribution -- underscores the shifting priorities of the country’s upper echelons. China’s central bank governor, Yi Gang, touted a “new development model” for the property industry, suggesting the nation is finally making the long overdue shift toward Singapore’s success story of accommodating most of its population in public housing.

The implications are far reaching. Among them: a likelihood that state-backed developers will be reasserted as dominant operators, a slow but inevitable demise of those that are distressed, and lower expectations for investment returns.

It’s caused unprecedented wealth destruction. Wanda’s Wang has lot 61% of his worth since the end of 2019, Sunac China Holdings Ltd. founder Sun Hongbin saw nearly 90% of fortune evaporate, while Evergrande’s Hui led the plunge, losing nearly $24 billion. Many of the tycoons including Hui have dipped into their own pockets to save their operations, adding another drag on their wealth.

Property billionaires now account for less than one-10th of China’s richest people, according to the Bloomberg Billionaires Index, curtailing a group of arrivistes who just started gaining power and influence in the state-dominated country.

The regulatory fallout is trickling into the wider economy, ensnaring every sector from tech to education, and prompting the government to dial back. Seeking to avoid a full-on crisis, China has relaxed austerity measures for home purchases in recent months and cut interest rates.

Recovery, however, is expected to be slow -- not only because of the country’s Covid Zero strategy, but also due to an overhang brought on by a twice-a-decade leadership conclave later this year, where Xi is expected to stay on a third term.

“Unprecedented liquidity pressure persists for Chinese developers. Distressed developers’ liquidity struggles are set to continue into 3Q as fear of non-completion could extend their home-sales slump.”

With the sector accounting for a third of real growth -- similar to what was in Spain right before the property burst of 2009 -- the government needs to bring it back to global average levels, said Alicia Garcia Herrero, chief economist for Asia Pacific with Natixis SA.

“I don’t think we shall see a V-shaped recovery,” said Garcia Herrero. The government doesn’t “want the sector to continue to grow too fast for too long.”