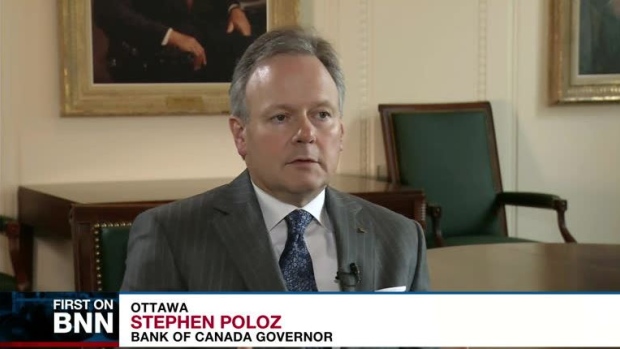 Bank of Canada Governor Stephen Poloz in an interview with BNN , BNN

The following is a transcript of BNN’s interview with Bank of Canada governor Steven Poloz about the threat of trade protectionism and rising personal debt loads.

Steven Poloz: Global protectionism goes against our basic livelihood. Canada is a very trade-dependent economy, always has been and I expect always will be. And the degree of integration between the Canadian and U.S. economies means certain forms of protectionism can be highly disruptive and can cause a shock, not just to investment, but to actual jobs today. It’s our biggest concern. It’s not really quantifiable, at this stage. What we tried to do in the MPR is just give people a sense of how we would go about analyzing specific examples — and of course, they are all negative. Now, they’re not negative just for us, but they’re negative for everybody including the United States.

Greg Bonnell: We’ve had a few strong months and then a bit of setback where we fell into a deficit in our position with the world. What do we need to see in terms of trade and strength in Canada for you to feel good with where we are at, and what kind of a loonie level do we need to get to get there?

SP: It’s very little to do with the level of the exchange rate. It’s more about the underlying demand from our trading partners. As you know the U.S. economy is in solid shape. Other trading partners are gathering momentum, which is what the IMF is saying and what our forecast today is saying. We have a reasonable base there, but the penetration of trade into that story is well below where is always used to be. That’s just in certain key areas we’ve lost ground. In particular, automobiles. We have definitely lost share in the North American auto market. We still have a good share in [auto] parts, but in the actually assembly of cars we’re lower. That’s just one example where competitiveness challenges of one form or another are hitting us and sometimes it happens in lumpy fashion. What we need to see is steady growth in categories that are in many cases new. Or, at least, they are less traditional because, as they say, they have a longer term growth outlook. And we see that momentum and we see supply chains operating across the border in those kinds of sectors. And, firm creation — new firms, maybe suppliers to that supply chain being created, which is really not happening at a very good rate at this stage. When we have those pieces coming together then we are going to feel a lot more confident that this is a natural, sustained recovery. Right now it is still pretty reliant on fiscal shock and obviously on monetary policy and so we can’t be assured it is sustainable.

GB: In the MPR you also said that even though we are carrying record debt loads that that is going to increase. Do Canadians just need to cool off here?

SP: What we need to remember is that we are not picturing somebody who is not increasingly becoming more indebted. Somebody like you or me is indebted, then the guy across the street gets indebted. So the number — the ratio of debt to income — goes up, because some fresh borrower joins the club. Each of those people may be highly sustainable. It doesn’t make it less sustainable that the ratio rises. Our job is to make sure that the economy does get back home so jobs are created, income rises, and that makes the denominator stronger and makes that whole thing more sustainable.