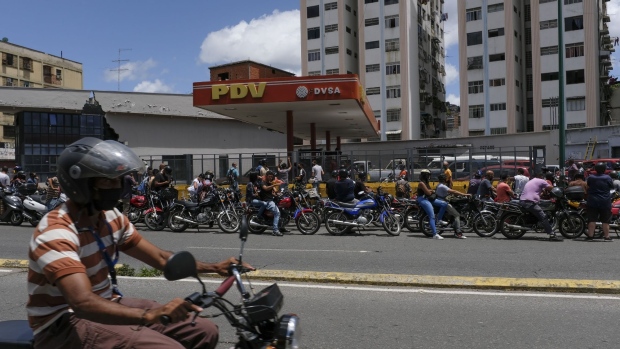 Motorcyclists wearing protective masks wait in line for fuel in at a gas station in Caracas, on Aug. 14. , Bloomberg

(Bloomberg) -- Protests are intensifying across Venezuela over worsening shortages of everything from fuel to medicine as the pandemic aggravates the world’s longest recession.

Demonstrations spread this week as growing numbers of Venezuelans flouted lock downs and risked arrest to demand the restoration of electricity, water and gas services, according to the local NGO Venezuelan Social Conflict Observatory, or OVCS.

Most of the protests have taken place outside the capital, Caracas, which is relatively well provisioned compared to the rest of the country.

Gasoline shortages drove 40% of the 748 protests that took place in August, according to the OVCS. Acute fuel scarcity is complicating efforts to distribute other products, to get coronavirus patients to hospital, and is even making it difficult to get dead people to the morgue.

Iranian vessels with gasoline due to arrive next week could bring some respite. This would Iran’s second shipment to Venezuela since May, when five vessels unloaded nearly 1.5 millions of barrels of Iranian gasoline, additives and parts for local refineries.

The fuel deliveries increased friction between Iran and the U.S., which has imposed sanctions on the socialist government of Nicolas Maduro since 2017.

“Protests have intensified this week outside Caracas in almost all 24 states,” OVCS Marco Ponce said in an phone interview.

Venezuela’s economy is forecast to shrink another 20% this year as the coronavirus outbreak worsens the crisis caused by collapsing oil revenues, economic mismanagement and U.S. sanctions.