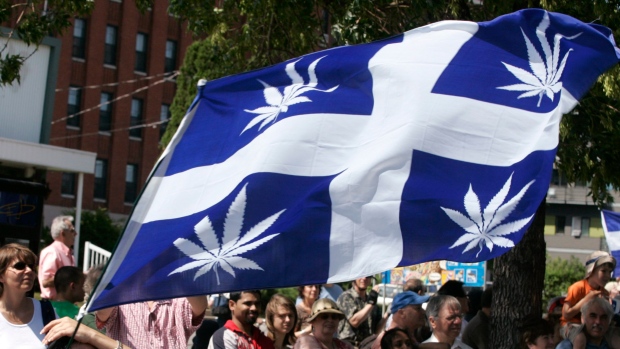 A woman waves a Quebec flag with the fleu-de-lis replaced by marijuana at the Fete Nationale parade to mark Quebec's provincial holiday, in Montreal on Sunday, June 24, 2007 , The Canadian Press/Ian Barrett

MONTREAL -- The Quebec government tabled strict marijuana legislation Thursday, striving to give itself full control over the industry, push out the private market and create a zero-tolerance policy for driving under the influence of all drugs.

"This is an important change to our society," Public Health Minister Lucie Charlebois told reporters after tabling Bill 157.

"The experts recommended we be prudent to start and then to see if we need to adjust. They asked us to be rigorous and to see how citizens evolve."

Prime Minister Justin Trudeau has promised Canadians marijuana will be legal by next July 1, and has left it to the provinces to create their own legal framework on how to enforce the law on their territory.

Quebec was originally reticent to go along with the marijuana plan, citing concerns from citizens that legalizing pot would encourage young people to pick up the habit and would foment social problems.

The province has also asked Ottawa several times to delay legalization by a year, but to no avail.

Ontario was the first province to announce its detailed marijuana plan, which included the sale of the drug in up to 150 stores by 2020 run by the Liquor Control Board of Ontario.

Charlebois said Quebec needed to act quickly to ensure its rules applied to its citizens.

"We had no other option but to be ready," Charlebois said. "We don't want others to regulate us."

Under the new bill, all cannabis cultivated in Quebec must be sold by the government, through a subsidiary of the provincially run liquor board, although the legislation gives the province flexibility to make exceptions.

Finance Minister Carlos Leitao said Quebec will open 15 marijuana stores across the province by July 1 and will control sales online.

"We need to be flexible," he said, referring to the possibility of opening more stores. "We will see how the market evolves.

"What's clear is that there will be no cannabis sold in regular liquor stores."

It will also be illegal to cultivate cannabis for personal or commercial use, unless authorized by the government.

People of legal age will be allowed to possess up to 150 grams of cannabis in their home, and 30 grams on their person.

The bill forbids anyone under 18 years old from possessing cannabis and prohibits anyone from consuming it where smoking tobacco is also illegal.

Bill 157 also introduces "a new principle of zero tolerance" regarding drivers caught under the influence of marijuana or any other drug.

"It prohibits anyone from driving a vehicle ... or having control of a vehicle if there is any detectable presence of cannabis or any other drug in their saliva," Charlebois said.

Those rules, however, will only come into force when the technology for roadside saliva tests is approved by the federal government, she added.

In the meantime, patrol officers are being trained for signs of impaired driving and have the right to arrest anyone suspected of driving under the influence of marijuana.