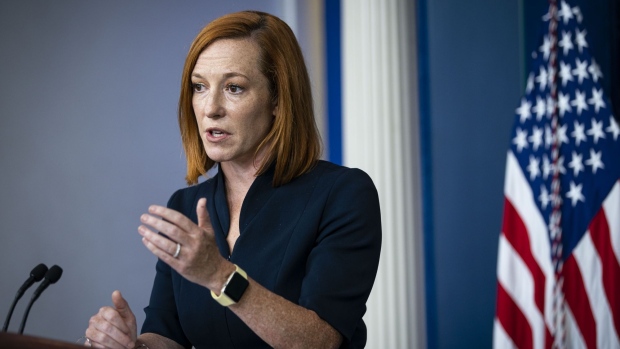 Senator Joe Manchin, a Democrat from West Virginia, walks through the U.S. Capitol in Washington, D.C., U.S., on Thursday, Dec. 16, 2021. Democrats are seeking a path forward on legislation to strengthen voting rights as negotiations stumble on their $2 trillion tax and spending reconciliation measure. , Bloomberg

The statement, by far the most sharply critical from the administration of the West Virginia senator, accused Manchin of reneging on pledges made recently to President Joe Biden.

Manchin’s statements are “at odds with his discussions this week with the president, with White House staff and with his own public utterances,” Psaki said. His comments “represent a sudden and inexplicable reversal in his position, and a breach of his commitments to the president and the senator’s colleagues in the House and Senate.”

“While that framework was missing key priorities, we believed it could lead to a compromise acceptable to all,” she said.

Instead, Manchin announced Sunday he would not support the bill -- killing it in its current form and casting significant doubt on whether anything will pass.

Manchin cited an estimate that the plan will ultimately have a much larger cost. Psaki said that estimate is based on an unfunded extension, which the current bill doesn’t include and Biden doesn’t support. “Senator Manchin knows that: The president has told him that repeatedly, including this week, face to face.”

Psaki said they’ll keep talking. “Just as Senator Manchin reversed his position on Build Back Better this morning, we will continue to press him to see if he will reverse his position yet again, to honor his prior commitments and be true to his word,” she said.