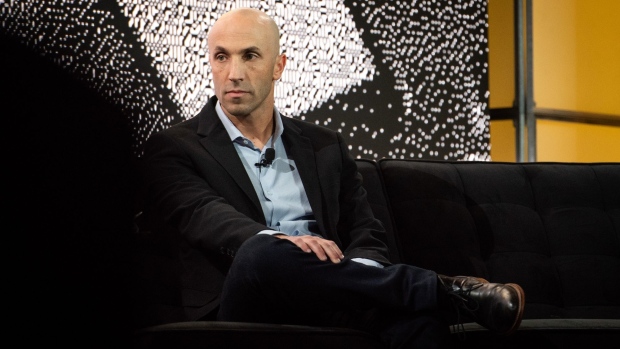 Daniel Ramot at the Sooner Than You Think forum on Oct. 30. , Bloomberg

The financing was led by Janus Henderson Group Plc with participation from funds and accounts managed by BlackRock Inc., ION Crossover Partners Ltd, Koch Disruptive Technologies Investments, and existing investor Exor NV, according to the company.

Founded in 2012, Via equips cities with software for public transit systems that delivers the on-demand service consumers have grown accustomed to from ride-hailing platforms Uber Technologies Inc. and Lyft Inc.

“This is the most exciting time in transportation in decades,” said Via co-founders Daniel Ramot and Oren Shoval in a statement. “Cities around the world are recognizing the critical role that technology can play in improving the efficiency and quality of their transit networks.” The latest cash infusion will help Via accelerate expansion into new markets and continue to improve the product.

The New York-based company builds apps for transit agencies that allow riders to pre-book pickups, check schedules or request paratransit services. Using real-time rider and traffic data, Via’s algorithms adjust routes and schedules to dispatch vans, buses and shuttles more efficiently by pooling people traveling in the same direction into one vehicle. The company, which has contracts with more than 500 transportation agencies in 35 countries, also counts corporations and colleges as clients.

The pandemic has roiled the global transportation industry, cratered demand for ride-hailing and heightened fears of contracting Covid-19 in closed spaces that dissuaded commuters from taking public transit. Via, which also operates a commercial ride-hailing service similar to Uber and Lyft in New York and Washington, took a hit to both its consumer and public transit services as municipalities tightened spending budgets.

However, unlike the rideshare giants, Via’s core business revolves around working with cities to use technology to modernize outdated public transit infrastructure, not avoid it altogether. The pandemic highlighted a need to expand the reliability and reach of public transportation to serve low-income communities, seniors and people with disabilities. “Covid made ridership become more volatile and unpredictable and agencies were forced to make changes,” Ramot, who serves as chief executive officer, told Bloomberg in an interview.

Despite the initial disruption, pandemic relief legislation that replenished funding for transit programs has boosted business for Via. The company is also set to benefit from the $1.2 trillion Infrastructure Investment and Jobs Act. Via’s “TransitTech” software exceeded an annual revenue run rate of $100 million this year, the company said.

“People didn’t really think this was a great use of money pre-Covid-19,” Ramot said. “Coming out of it, we’re seeing budgets grow very quickly with bigger and longer-term contracts.” Once considered the more convenient transportation option, Uber and Lyft have been grappling with a driver shortage that has increased wait-times and fares for customers, a dynamic that benefits Via, as commuters turn to more affordable transit options.

In June, Bloomberg reported Via’s plans for an eventual initial public offering. Ramot declined to comment on timing but said “it makes sense for a company like Via to go public.”