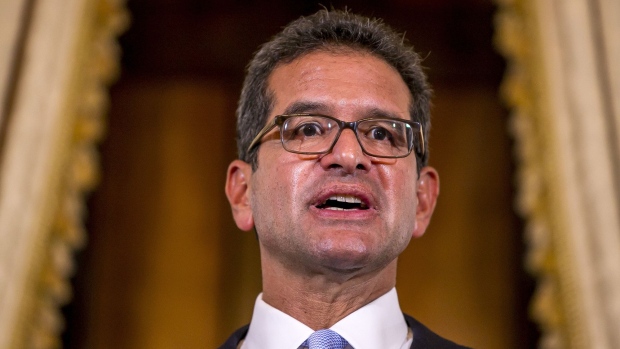 Pedro Pierluisi, nominee for Puerto Rico secretary of state, speaks during a news conference in San Juan, Puerto Rico, on Friday, Aug. 2, 2019. Puerto Rico's House voted in favor of the outgoing governor's chosen successor, Pedro Pierluisi, keeping his nomination alive for now. But confirmation by one of the island's two chambers will do little to ease uncertainty about who will become Puerto Rico's next governor when the current one -- forced out by weeks of massive street protests -- officially steps down at 5 p.m. Friday. Senate President Thomas Rivera Schatz delayed a discussion of Pierluisi's nomination until Monday. , Bloomberg

(Bloomberg) -- Puerto Rico Governor Pedro Pierluisi is prepared to argue before the court overseeing the island’s record bankruptcy case that public employee pension payments should be left intact and not reduced.

The governor sees the issue of Puerto Rico’s broke pension system that owes current and future retirees an estimated $55 billion as separate from the commonwealth’s plan to restructure $22 billion of bonds. Still, U.S. District Court Judge Laura Taylor Swain will weigh in on whether to cut pensions and by how much.

“I’ll make my case before the court when the time comes arguing in favor of not having any pension cuts,” Pierluisi said Friday in a phone interview. “I hope that the judge will see this issue my way.”

Puerto Rico’s financial oversight board, which manages the bankruptcy, wants the island to end its restructuring process by the end of 2021. The board is proposing cutting some pensions by 8.5%, although no payment would fall below $1,500 a month. That would save Puerto Rico an average $63 million a year for the next 30 years, an amount the commonwealth can easily afford to pay once it restructures its bonds, Pierluisi said.

Puerto Rico lawmakers anticipate filing as soon as Monday legislation that would authorize new bonds to replace existing debt. It may also include proposed pension cuts while at the same time promising to pay retirees their full benefit if there is surplus revenue.

If the governor and island lawmakers pass such legislation, Swain may be more likely to approve the debt restructuring proposal and allow Puerto Rico to cut its obligations. It’s unclear whether Pierluisi would sign such a measure as he has said public employees have already faced reduced benefits through pension reform measures.

“If I am convinced that I can say with a straight face to all pensioners that the bill guarantees that they’ll be paid what they’re due, then I’ll have no problem with the bill and I’ll sign it,” the governor said.