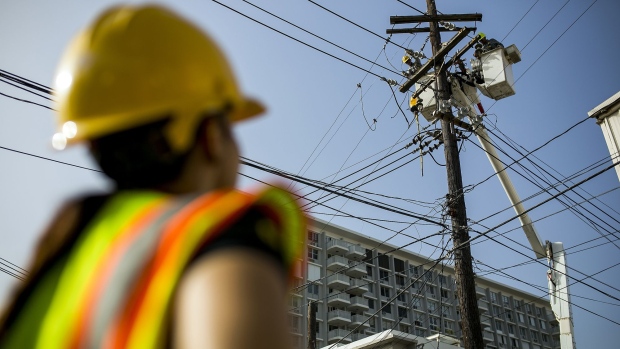 Homes without electricity since Hurricane Maria stand in the town of Jacanas, Yabucoa, Puerto Rico, on Friday, May 18, 2018. The bankrupt U.S. commonwealth's investment bankers last week started sounding out suitors for the eight-decade-old monopoly known as Prepa, whose rickety infrastructure was almost erased by Hurricane Maria in 2017. The halting efforts to repair the damage and improve the antiquated grid have been the central obstacle in recovery. , Bloomberg

(Bloomberg) -- Puerto Rico will take a major step toward transforming its government-owned power provider next week as Luma Energy is set to begin operating and managing the utility, part of the commonwealth’s plan to rehabilitate its aging system and end chronic outages.

Luma is poised on June 1 to take over transmission and distribution for Puerto Rico’s Electric Power Authority, which is the main supplier of electricity for the island’s 3.3 million residents and is one of the two largest U.S. public power utilities by customer base. Prepa, as the agency is known, will retain ownership of its infrastructure and assets.

Improving electricity is key to pulling the U.S. territory out of years of economic decline. Residents and businesses have suffered with unreliable service and rates that are higher than on the U.S. mainland. But the utility’s main labor union and some politicians are trying to delay or derail the takeover. They question if Luma Energy will have enough workers to operate such a large system and say the contract leaves thousands of existing public employees adrift.

“The Prepa transition is very unique in the world,” said Wayne Stensby, president and chief executive officer of Luma Energy. “If the simple question is, have you done one just like this before? I think the answer has got to be no.”

The handover comes as both the commonwealth and the power utility are in bankruptcy, with Prepa seeking to reduce $9 billion of debt, after years of population decline and borrowing to cover budget deficits. Hurricane Maria in 2017 destroyed much of the power grid, leaving customers in the dark for months. The Federal Emergency Management Agency in 2020 earmarked nearly $10 billion for repairs.

“We cannot grow long-term if residents and businesses cannot afford or cannot get reliable electricity,” Natalie Jaresko, executive director of Puerto Rico’s financial oversight board, said during an April 23 public meeting. Congress created the oversight panel in 2016 to fix the commonwealth’s financial crisis.

Prepa’s bankruptcy began in 2017, as its unwillingness to raise rates led to infrastructure decay and forced it to borrow just to cover operating expenses. Critics say the agency’s management also became deeply politicized as key jobs were given to party loyalists rather than to the most qualified.

“The private sector entity can come in and shake things up and run things more as a business, with perhaps less political consideration that can lead to inefficiencies and higher costs sometimes,” Patterson said.

Still, many on the island don’t support the change. Luma -- a consortium of Atco Ltd. and Quanta Services Inc. working with Innovative Emergency Management Inc. -- won the contract in a bid last year. But critics say the deal is too generous and was crafted behind closed doors. They point out that Puerto Rico only announced the 15-year agreement -- including the winner and the fees -- once the contract was signed.

The contract requires Prepa employees to reapply for their jobs at Luma. The powerful UTIER electrical-workers’ union says the deal violates local labor laws and has urged its members not to make the switch. Last week a federal judge refused the union’s request to halt the contract altogether.

“Everybody agreed that we needed a change in the energy authority,” said Rafael ‘Tatito’ Hernandez, president of Puerto Rico’s House of Representatives. “But nobody agrees with this change they’ve made with Luma.”

Prepa employees account for about half of the 2,000 workers that Luma has already hired, Stensby said. Even so, some wonder if Luma will have sufficient linemen, the skilled workers who repair and upgrade electrical lines and remove trees and vegetation from the distribution system, just as Puerto Rico enters hurricane season. Both Prepa and the Los Angeles Department of Water and Power have about 1.5 million customers.

Luma has hired 250 linemen and 250 electrical technicians under contract and plans to hire more, according to Laura Rentas, a spokesperson for Luma.

“There’s a very real risk that you end up losing a tremendous amount of skilled linemen and other skilled employees and starting this operation on June 1 with an under-trained workforce,” said Cathy Kunkel, energy finance analyst at the Institute for Energy Economics and Financial Analysis.

Luma’s Stensby said the company has enough employees and will continue to add workers. “In our view, we’re in good shape to get started,” he said.

Prepa workers not hired by Luma will become public employees of Puerto Rico’s central government, which means the bankrupt commonwealth will have to find a way to pay their salaries and benefits. “Where’s the logic in putting these 3,000 employees in the general fund?” Hernandez said. “It creates a tremendous amount of distortion.”

In a sign of how tense the transition might be, Luma said it’s working with Puerto Rico and federal law enforcement in the event someone tries to upend the transition through sabotage or other means, Stensby said.

In the days leading up to June 1, UTIER members have blocked Prepa offices and held marches. On Monday, the utility said it urged workers to report to duty as 30,000 residents were without power. UTIER denied any staged walkout.

Some local lawmakers also question Luma’s claim that it will save the utility $110 million by 2024, as the company hasn’t detailed how it will achieve those reductions. Luma will find efficiencies through the way it dispatches and responds to outages, Stensby said. The company’s initial budgets avoid rate increases, he said.

Prepa will pay the company $115 million per year while the utility is in bankruptcy. Once Prepa its out of court, it will pay Luma $70 million to $100 million annually for the first three years, increasing to $105 million for the remaining years.

“Let’s not be fooled, there is no empirical analysis that justifies those assumptions,” said Luis Raul Torres, a Puerto Rico assemblyman and chair of the House’s Economic Development Commission. “It’s the billions that Luma will receive from FEMA that will allow it to renew its equipment -- that’s where we’ll see true benefits and efficiencies, because we’ll have new equipment that’s inherently more efficient. But we can have that without dismantling the public utility.”